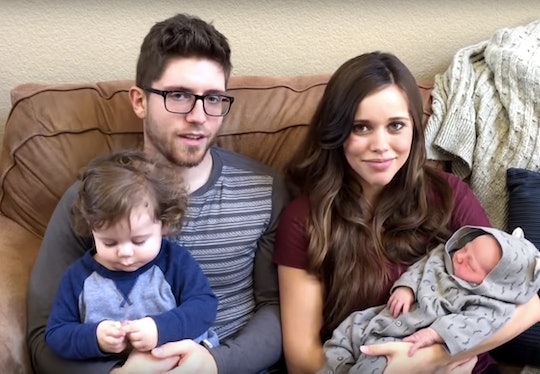 Jessa Seewald comes from a big family, which is the understatement of the century, of course. Seewald (whose maiden name is Duggar) is part of the famous Duggar family of TLC's 19 Kids And Counting. Jessa was featured heavily on the show as one of the aforementioned 19 kids, and has actually gone on to marry and have two of her own children. So how exactly did Jessa Duggar meet husband Ben Seewald? Both are members of devoutly religious families, so it makes sense that the two would meet in church.

According to Jessa's parents, Michelle and Jim Bob Duggar, Seewald and his family visited their church in Tontitown, Arkansas. Seewald's family is from nearby Hot Springs, Arkansas, and the Duggars decided to invite them back to the house for some "fellowship" after church. According to matriarch Michelle Duggar, it was actually Jim Bob who connected the two initially:

During fellowship at our home, Ben and Jim Bob would often sit with the guys and talk about doctrine and the Bible. At one point, Jim Bob said to Ben, "You know, you've been bringing up a lot of these truths from the scripture. This is a topic that we've actually been talking about in our home and Jessa has really been studying this very thing. You guys would probably enjoy talking about it. So why don't you text her?"

It's so funny. Jim Bob was the initiator. I don't know if Jim Bob even knew that Ben was really interested in her, but he had already spotted Jessa. They started texting and talking about these scriptures and things just took off.

The couple began a formal courtship in 2013, which dad Jim Bob described to People:

Courting is getting to know each other in a group setting, both families spending time together and the couple setting goals together to determine if they are meant to marry. With dating, a couple will often pair off alone and that sometimes leads to a more physical relationship.

The couple went on to get married on Nov. 1, 2014, when Jessa was 21 years old and Ben was 19 years old. A year after their wedding, they welcomed their first baby, the adorable Spurgeon Elliot Seewald who has taken over mom Jessa's Twitter feed with his shenanigans.

Now 15-month-old Spurgeon will need to get used to sharing his social media space with someone new: Baby brother Henry Wilberforce was born on Feb. 6.

Jessa and Ben told People that Spurgeon sees his new baby brother as a "toy" and (I'm sure all moms can relate to this one) wanted to "touch his eyes and put his fingers in his mouth." But the happy couple aren't letting a few toddler woes get in the way with their plans for expansion; The Counting On stars (TLC's spinoff series featuring Jessa and her two married sisters Jinger and Jill) are already thinking about more babies:

It will be a little while since we just had a baby, but adopting and fostering to adopt is very much in our hearts.

But for now, it seems Jessa and Ben are enjoying married life and the chaos that comes with a household of four.