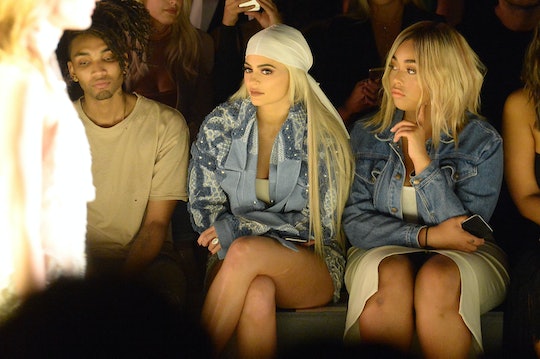 There's nothing like a best friend, especially when you're going through a major life moment. Even an alleged and reported major life moment, like the one young Kylie Jenner is allegedly and reportedly experiencing. While the entire Kardashian/Jenner brood has kept mum about Kylie's pregnancy rumors, there remains one person incredibly close to her who might know a little something. Her best friend Jordyn Woods, the woman she pledged her loyalty to during a recent commitment ceremony. Jordyn Woods and Kylie Jenner have been friends for quite some time, although the story of how they met remains nearly as much of a mystery as all of those reported Kardashian/Jenner pregnancies.

While the Life of Kylie star and her best friend, Wilhelmina Curve model Woods, have been very public about their mutual adoration, they've never shared the story of how they met. Possibly because their friendship has become so much part of the framework of both their lives, it might seem impossible to imagine a time when they weren't friends. As Woods explained to People at a recent event in West Hollywood:

Having a best friend is, like, everything. I feel like everyone deserves a best friend. It’s just like having someone you can call at any time. Obviously, I have my family and I have my mom, but sometimes you need that extra person that isn’t a part of everything, going through the same things as you. It’s really helpful. I feel like right now, at this age, you develop the friends that you’re going to have forever, and we do everything together.

As Jenner's longtime best friend, Woods would naturally be privy to all sorts of insider information, especially when it comes to Jenner's alleged pregnancy with boyfriend, rapper Travis Scott. Every media outleg reported Jenner's alleged pregnancy on Sept. 22, based on multiple sources who "confirmed" that 20-year-old Jenner was "at least" four months pregnant and expecting a baby girl. Jenner's representative has not responded to Romper's request for comment.

The news came as a massive bombshell, especially considering Kim Kardashian-West and her husband, rapper Kanye West, are also reportedly expecting a third baby via surrogate in February. Oh, and did I mention that Khloe Kardashian is also reportedly pregnant (though her rep has not confirmed this to Romper)? It's an exciting time to try Keeping Up With The Kardashians.

While the speculation about the Kardashian/Jenner pregnancies has hit an unprecedented fever pitch, Jenner's best friend Woods made it clear during an interview with People that she won't be sharing any intimate details of her friend's life any time soon.

When the media outlet asked her what sort of parent she thought Kylie might be, the young model and co-star of Life With Kylie kept her composure.

Honestly, I have no clue. I have a no clue. I don’t really have any comments on that.

It's just that sort of fierce loyalty a girl needs in her best friend, especially one as famous as Jenner. No wonder they had a commitment ceremony blessed by a Shaman while visiting Peru.

Woods also opened up to reporters about the nature of trust in friendship, and her words were full of wisdom beyond her years, according to In Style.

However these girls met, they've got each other's backs.