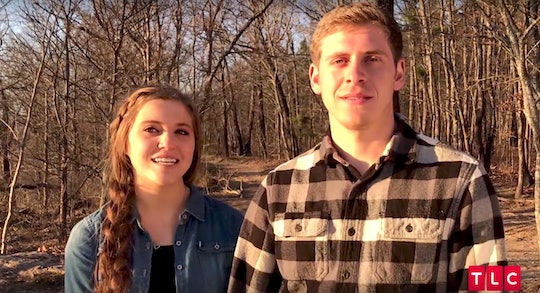 If you've been keeping up with the... Duggars lately, you know that it can get a little hard to keep track of all the marriages, engagements, pregnancy announcements, and births in this huge family. And Counting On star Joy-Anna Duggar is the latest of her many, many siblings to announce that she and new husband Austin Forsyth are expecting. But, honestly, in the hubbub of new life that pretty much defines the ultraconservative reality TV family, it's easy to feel like the details of their rapid courtship fell through the cracks a little bit if you missed an episode or two. So, let's back up and remember how Joy-Anna Duggar and Austin Forsyth met, because it seems like just yesterday that they revealed that they were a couple.

It may seem as though no time at all passed between the time the two announced in November 2016 that they had entered into a courtship and their wedding the following May and the subsequent revelation that she is now pregnant just a few months later. Talk about a whirlwind romance for the 19-year-old, right? But, in reality, she and Forsyth have known each other for quite some time — even if those familiar with the Duggars' super strict rules about relationships with the opposite sex can feel pretty certain that their friendship was purely platonic.

According to People, Duggar and Forsyth, 23, had known each other for 15 years before getting their parents' permission to officially "court." They first met when Forsyth's family — which was a host family on the CMT reality series World's Strictest Parents in 2009 — moved to Arkansas and joined the same church that the Duggars belong to.

Clearly, these two lovebirds share similar backgrounds, which will certainly make it easier for them to agree on whether to impose such rules as first kisses must be saved for your wedding day on their own children sometime in the future. So, when the time was right, Forsyth decided to ask Duggar family patriarch Jim Bob Duggar for his permission to court Joy-Anna, as documented on a recent episode of Counting On:

You know, over the years, I have just been watching and I really admire her heart for the Lord and her character. She’s such a diligent worker. She gets all the younger siblings working. She's a good delegator.

Not the most romantic reasoning for wanting to marry someone, but, y'all, she said yes!

I don't know whether Duggar and Forsyth suspected they would end up together one day when they met all those years ago. But Duggar shared in a recent episode of Counting On that she had feelings for him before he ever pursued a courtship with her.

"Just to see his heart, really, was the first thing that attracted me to him," she said, according to Entertainment Tonight, adding that she was "so excited" that he asked her father for her hand in courtship. For his part, Forsyth shared in the same episode that he knew he wanted to be with her after he attended flight school in Mississippi.

Despite rumors that Duggar actually knew she was pregnant before she walked down the aisle — which would be a major scandal within the Christian family — she and Forsyth are doing a great job of giving the impression that all is going according to plan. And with the Duggars, it seems as though the plan is pretty much always to have more kids, so these two are well on their way. The next chapter in their story, of course, is the birth of their very first child.

More Like This
Anne Heche Remembered As "Loving Mother" To Her Two Sons After Her Death At 53
Dan Levy Just Proved He's The Ultimate Uncle With This Perfect, Sweet Answer
Drake Shared A Photo Of His New Face Tattoo & It's A Sweet Tribute To His Mom
Gwyneth Paltrow Documented Her Fun & Luxurious Mother-Daughter Trip To NYC With Apple