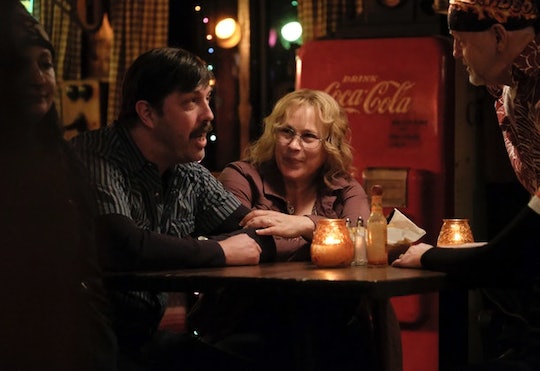 Before she got involved with the two inmates who would make her a household name, Joyce "Tilly" Mitchell was by all accounts a happily married woman. She and her husband had a long history before they found themselves at the center of the Dannemora escape scandal. But just how did Joyce and Lyle Mitchell meet? Their full backstory remains a bit of a mystery, but some is known about their relationship.

Ben Stiller's production of the Showtime mini series Escape at Dannemora tells the true crime story of a 2015 prison break in upstate New York. Patricia Arquette play Joyce "Tilly" Mitchell, the inmate supervisor who played an integral role in the escape of two convicts. Eric Lange is cast as Joyce's husband Lyle and the two of them take viewers on quite the ride. But as the show's main storyline occurs long after Joyce and Lyle met, fans aren't shown how they found one another.

Their story is set at Clinton Correctional Facility, commonly referred to as "Dannemora" after the town that houses the prison. In 2015, two inmates, Richard Matt and David Sweat, made a break for it with the help of Joyce and a corrections officer named Gene Palmer, according to NPR. Joyce was later charged with promoting prison contraband and criminal facilitation and admitted to having sexual relationships with both Matt and Sweat, as noted by NPR.

Through it all, her husband Lyle remained by her side — in spirit, if not in person. Despite a short separation, the two are still married. Their long history could explain Lyle's dedication to Joyce despite her crimes and personal relationships with the convicts.

Joyce was 51 years old and married when she met Matt and Sweat, according to E! News. Both she and her husband Lyle were employed at the Clinton Correctional Facility in 2015, according to Fox News, but had been together long before that. According to CNN, they had known each other for 21 years and had already been married for 14 years before Joyce got involved with the two escapees.

Little information is available on the specifics of their relationship, such as how and where they met. But Joyce only worked at the prison for seven years before the breakout, so she and Lyle got their start as a couple before becoming coworkers.

Lyle's attorney Peter Dumas told reporters that he was unaware of his wife's criminal involvement with the inmates, though there was suspicion of inappropriate personal relationships. "I hate to use a cliche, but love is blind," Dumas previously told TODAY. "And I think with him, he was just so happy with it that they rarely fought." Dumas also stated that Matt and Sweat intended to harm or even kill Lyle, motivating Joyce to go along with their plans.

Arquette told NPR that she was drawn to Joyce's character because of her "very interesting" take on love, both that for her husband and Matt and Sweat. Arquette sees Joyce "as a woman who loves too much — that sort of love-addict personality. A part of her is being seen and loved by each of these different men." The love that has lasted through it all is the love of her husband Lyle.

While I can't imagine anyone blaming him if he turned his back on Joyce given their circumstances, Lyle has been by her side throughout her three-to-seven year prison sentence. He even publicly defended her to The Daily Mail. "Palmer knew everything that was going on, but it was easier for them to put all the blame on my wife not him," he said. "What he did was ten times worse than what my wife did. I just want her home where she belongs."

Given the renewed interest in the Dannemora escape, due in large part to Stiller's Showtime special, Lyle and Joyce will likely be approached for numerous interviews on all aspects of their lives. Perhaps they will choose to share more about how they met, or perhaps they like keeping some information to themselves. Either way, their story is a fascinating one.