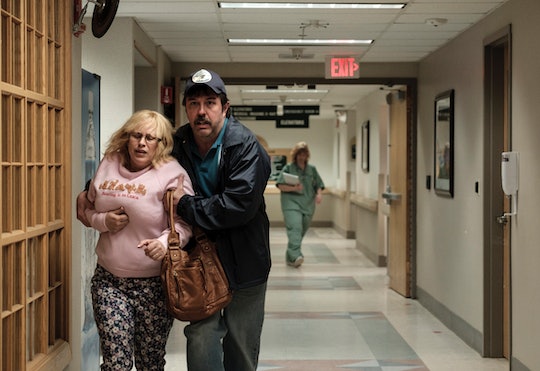 This Is How Joyce "Tilly" Mitchell Got Caught In Real Life

In Showtime's Escape at Dannemora, the story of Richard Matt and David Sweat's daring escape from a 170-year-old prison complex is told through Joyce "Tilly" Mitchell. Wearing a prison uniform, she sits in front of a state investigator played by Bonnie Hunt and slowly, reluctantly unravels the tale which eventually ends in Matt and Sweat's capture. But how did Joyce Mitchell get caught in real life? The miniseries actually stays true to the real story in this regard.

The real Mitchell came forward and began divulging information pertinent to the investigation just one day after Matt and Sweat broke out of prison, according to a 2015 CNN report. She didn't tell the whole story right away, but rather, fed investigators bits of intel over the course of the three-week manhunt. Both Escape at Dannemora and real life reports seem to suggest that she gave up the information with a great deal of ambivalence — both wanting to set things right again by leading police to the escapees and feeling hesitant about incriminating herself. In the end, Mitchell was convicted on a felony charge of promoting prison contraband and a misdemeanor charge of criminal facilitation. She was sentenced to up to seven years in prison and was denied parole at her last two hearings.

Mitchell pleaded not guilty to the charges, but she did voluntarily begin giving up information to authorities after being unable to follow through with her role in the escape plan. After conducting sexual relationships with both Matt and Sweat, Mitchell, a prison employee, smuggled in hacksaws for the pair concealed inside packages of frozen hamburger meat. Matt and Sweat would later use these hacksaws to saw through steel cell walls and a 24-inch steam pipe, eventually slipping out of the prison through its piping and ventilation system.

Mitchell was supposed to pick them up in her jeep and bring them back to her house on the night they finally cleared a path for escape. She was also supposed to bring along supplies, including weapons to kill her husband and a shovel to dispose of the body. Originally, Matt, Sweat, and Mitchell were supposed to run away together after making their escape. But on the night they broke out, Mitchell had second thoughts and never met up with them.

The escapees were forced to run away on foot through the unforgiving upstate New York wilderness in the middle of summer. Matt and Sweat survived largely by breaking into and looting area cabins and eventually were apprehended by police after going their separate ways. Matt, refusing to surrender, exchanged gunfire with police and was ultimately shot and killed. Sweat was also shot while running away, but survived his injuries and is now back in prison carrying out the rest of his sentence.