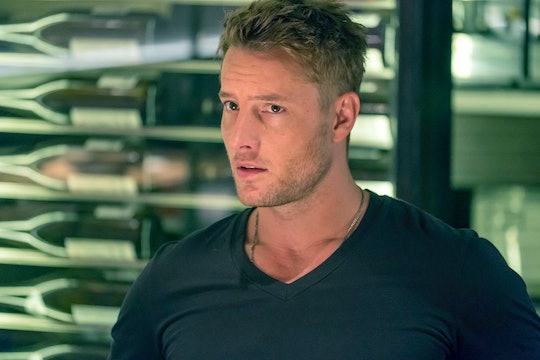 Just in case you thought you were going to get answers from the Season 2 premiere of This Is Us, the writers had to go and throw in several new questions to confuse and intrigue viewers even more. Along with the house fire to give fans a major clue about Jack’s death, there was also Kate’s dog, Randall’s girlfriend, and Kevin’s broken leg — all possible signifiers of the timeline of Jack’s death. But how did Kevin break his leg on This Is Us?

Clearly, the injury might have something to do with Jack’s death. Not that the two incidents are directly related necessarily, but now we know that the two things happen relatively close to one another. So if viewers see a flashback and Kevin isn't wearing a cast, then they know Jack will probably be safe throughout that episode. But if he is in the cast, that may not be the case.

This Is Us star Mandy Moore stressed the importance of all the little details in the premiere at a special screening for People and Entertainment Weekly. "There were some clues I don’t know if people picked up on — Kate was holding a dog, Randall’s got a girlfriend, and Kevin has a broken leg," she pointed out. "These are all things that I think people are going to see sort of the origin of in the next couple of episodes, leading up to figuring out a bigger piece of the puzzle." So all of these clues were put into that scene for a reason. So with all of that in mind, how Kevin broke his leg is probably important too.

The cause of Kevin’s broken leg isn't necessarily the house fire, but I wouldn’t rule that out completely. If he fell or had to escape the burning house through a second floor window, then the cast on his leg makes sense. It would also mean that the charred remains of the Pearson house that Rebecca drives up to at the end of the This Is Us season premiere have been that way for longer than a day or two, which is also totally possible.

Another way Kevin might have broken his leg on This Is Us, though, is through sports. Back in Season 1, viewers saw a flashback scene from Randall and Kevin’s teenage years. At Randall’s private high school, he makes it onto the football team and at Kevin’s school, he’s on the football team as well, making the boys rivals not only at home but on the field as well. It gets so bad at one point that they actually get into a fight on the actual football field.

I don’t think Randall had anything to do with Kevin’s broken leg, but the fact that he's active in sports could be how Kevin broke his leg on This Is Us. And it also means that Jack’s death could occur anytime during the high school football season, which wouldn’t be a total reach since the scene with Rebecca breaking down in the car has her in a Steelers jersey.

The actual cause of Kevin’s broken leg will likely be revealed once more flashbacks are shown this season, but one thing viewers can probably count on is that when he does break his leg, that means Jack’s death is near, which is a terrifying thought, but his cast was shown in the Season 2 premiere for a reason.

I’m sure the casual This Is Us viewer could get away with not analyzing every little detail, but that’s where all of the answers are. And when we’re all left with so many more questions after the premiere than when it started, looking deep into the details is a must.