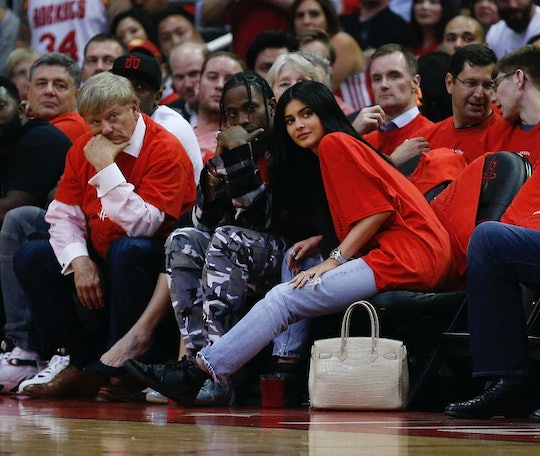 How Did Kylie Jenner & Travis Scott Meet? The Two Are Reportedly Expecting

Twenty-year-old Kylie Jenner is about to become even more famous, if reports are to be believed. According to TMZ, multiple sources say that Kylie Jenner is reportedly pregnant — and the father-to-be is her 25-year-old boyfriend, Travis Scott. So of course, the question on everyone's mind, is how did Kylie Jenner and Travis Scott meet in the first place?

Romper has reached out to Jenner and Scott's representatives and are awaiting a response. In the meantime, though, fans want to know a little more about this Travis Scott and how he won the heart of the Lip Kit Kween. Of course, Kylie's famous on-again off-again relationship with rapper Tyga came to an end earlier this year, and based on her own words, it seems like she felt like she was too young for the 27-year-old.

“There was absolutely not one thing wrong with me and T. He and I will always, always have a bond,” she said during the August 20 episode of E!'s Life of Kylie, according to In Touch. “There was no crazy fight, we just decided — well, I decided that I’m really young. I don’t want to look back in five years from now and feel like he took something from me when he’s really not that type of person.”

But ever since Kylie and Travis Scott were spotted holding hands at Coachella and a basketball game earlier this year, it seems like the two have been getting pretty serious. However, as Bustle reported, Kylie's sister Kendall and Scott have actually known each other for quite a while.

According to People, Scott was at Kendall's 21st birthday party in November 2016. And even before that, CeleBuzz reported that Kendall was seen leaving a popular NYC hotspot with Scott way back in September 2014. Clearly, the friendship is a family affair.

Also in November of 2016, Scott even appeared in a photoshoot for Kylie's brother-in-law Kanye West's fashion line, Yeezy. According to Vibe, the spread appeared in Berlin culture magazine 032c.

Kylie's big sisters Kim and Khloe also, of course, made a super sexy appearance in the photo shoot.

So, clearly Kylie and Scott have known each other for quite some time, even while she was involved with Tyga. But it seems like the two were just family friends. According to People, it wasn't until April of this year that Kylie and Scott officially started dating. And by June, they were already sporting matching butterfly tattoos the pair got on Kylie's 20th birthday.

According to Elite Daily, Kylie has never been recorded talking specifically about the rumored father-to-be of her baby. But, she has made some comments that sure seem now to have been about Scott.

As reported by Elite Daily, on episode of Life of Kylie, "Kylie claimed she rarely did anything during the time she was dating Tyga, and said she spent most of her time lying around the house." But, around the time when she started being spotted out with Scott, Kylie said on her show: “I've had more fun this past month than I have in like years ... I feel way more free. I'm just like really, genuinely happy right now.”

On that same episode, Kylie also let this slip: “I hope the person I'm dating is obsessed with me!”

Looks like things are pretty serious. Multiple sources have also now confirmed to People that Kyle and Scott are expecting. "She is REALLY excited and so is Travis!” a source told the publication.

Another source, who is reportedly close to the Kardashian family, told People: "It is an unexpected but completely amazing turn of events that she could not be more excited or thrilled about."