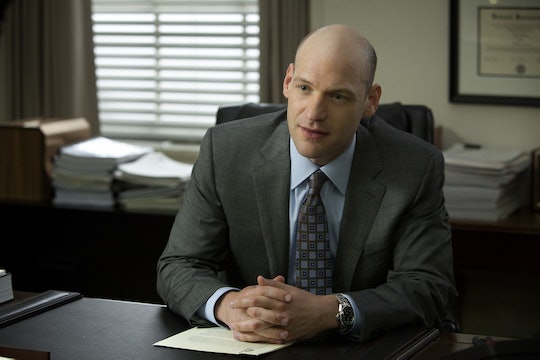 How Did Peter Russo Die On 'House Of Cards'? Frank's Dark Past Still Haunts Him

Peter Russo wasn't precisely known for making the best choices on House of Cards now, was he? In Season 1, he was one of the first in a long line of poor unfortunate souls to be manipulated by Frank Underwood and, by extension, my shameful crush Doug Stamper. Now that we're in Season 4, let's refresh our memories about how Peter Russo died on House of Cards, shall we?

Fans remember it well, I'm sure. After getting caught with a prostitute (Rachel), alienating his Philadelphia supporters, losing his girlfriend Christina, and messing up his shot to become Governor of Pennsylvania, Peter wasn't in a good place. Sure, he might have been exactly where Frank wanted him, but generally speaking, that's not a good place to be. Eventually, he completely lost control. So it wasn't a huge shock when the nation learned that he appeared to have committed suicide in his garage by carbon monoxide poisoning. He was clearly on a downward spiral in the eyes of the public, so while it was sad, no one on House of Cards was really surprised.

Except he didn't kill himself, did he? It was Frank, who treated Russo the same way he treated the dog in the first episode of the show. Frank orchestrated the murder of Russo because of the many strings attached to his name. If Russo were to expose any of the secrets Frank was keeping for him (for example, covering up Russo's DUI or that he was with Rachel the night he was pulled over), Frank would be done for. His remedy to the situation, no matter how drastic, was to kill Russo and tie up any lose ends permanently.

Russo's death eventually led to a domino effect of deaths. Zoe Barnes was investigating Russo's death — linking it to Frank — when Frank shoved her in front of a train. Then Lucas Goodwin was thrown in jail because of his quest to prove Frank was involved in Russo's death. Basically, this is all Frank Underwood's fault. Do not hesitate to blame him.