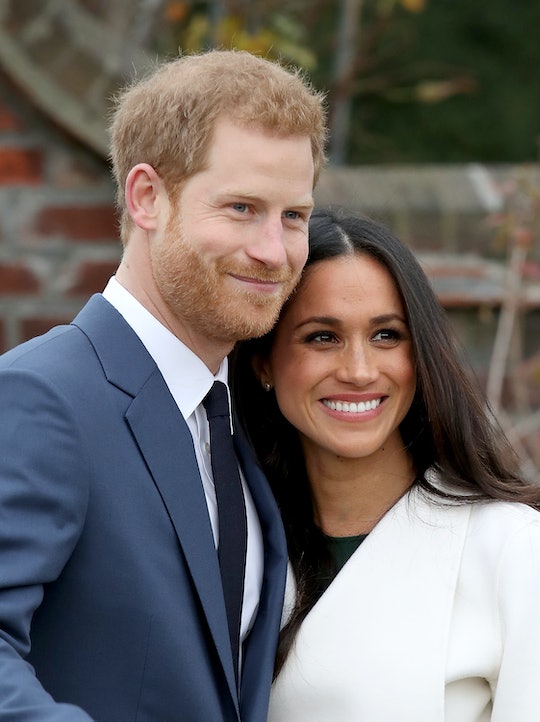 Wedding bells are ringing at Buckingham Palace! That's right, folks — Prince Harry has gotten down on one knee and proposed to his girlfriend and former Suits star Meghan Markle. Now that they're officially engaged, it's not surprising that many people are wondering more about the betrothed couple and how their relationship even began. So how did Prince Harry and Meghan Markle meet?

News about Prince Harry and Markle dating didn't break until October 2016, but the couple had met in London a few months prior to that. According to the BBC, one of Markle's close friends, Markus Anderson, reportedly introduced her to the prince. Anderson has been linked with the private members club, Soho House, which Prince Harry is also a member of. Markle confirmed that "the couple met in London through friends in July 2016" during her candid interview with Vanity Fair last month.

After news broke about their relationship and Markle was hit with a ton of backlash from the media, Prince Harry released an unprecedented statement through Kensington Palace in November 2016, in which he condemned the "outright sexism and racism of social media trolls and web article comments." This was the first time the prince confirmed he was dating the American actress. The statement also revealed that he was worried about Markle's safety and "deeply disappointed that he has not been able to protect her."

Despite the harassment, Prince Harry and Markle have stayed strong through it all. They were first photographed together publicly in December 2016 while shopping for a Christmas tree in London. They then went on a date to see The Curious Incident of the Dog in the Night-Time in London's West End.

Markle then attended her first public event with Harry in May of this year, at the Coworth Park Polo Club in Ascot, England. She also attended part of the wedding of Kate Middleton's sister, Pippa, later that month. However, their first official public appearance came at the opening ceremony of the international Invictus Games in Toronto, Canada in September, where they were seen holding hands.

The news of their engagement was expected and most people are thrilled about the upcoming nuptials. The wedding will reportedly take place in the spring of 2018, though no other details about the wedding have been revealed just yet. The couple could opt for a large royal wedding like Prince William and Duchess Kate's back in 2011, but as much as I would love to see that, it seems more likely they'll opt for something smaller. Prince Harry has made it clear in the past that he's never been comfortable being in the spotlight, therefore it'd be surprising if he agreed to have a big wedding, but you never know.

Once Prince Harry and Markle are wed, Harry could end up becoming a Duke, like his brother William did after he was married, which would make Markle a Duchess. However, if Harry remains a prince after the marriage, then Markle would go by the title: Her Royal Highness Princess Henry of Wales — though, according to The Mirror, Meghan isn't Markle's real first name, which could alter the title as well. Like so many celebrities, she chose to go by a stage moniker, and while Meghan is her middle name, her actual first name is Rachel.

According to The Telegraph, Prince Harry will remain fifth in line, though he'll become sixth in line after Prince William's third child is born. If and when Prince Harry and Markle have children, those kids will also be further down in the line of succession and they could even fall outside of the "core" Royal family, meaning they wouldn't have to do official engagements, like their parents did.

Regardless, Prince Harry and Markle getting married still seems like a story straight out of a fairytale, and it'll be amazing to see them get their happily ever after.