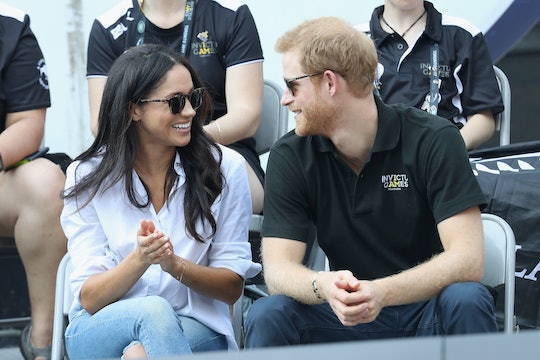 Here's When Prince Harry & Meghan Markle Might Get Married

Another royal wedding is officially on the way: after months of speculation, Clarence House announced Prince Harry and Meghan Markle's engagement in a statement released Monday morning. When will Prince Harry and Meghan Markle get married? The couple — who have been dating since July 2016, according to People — are set to be married in Spring 2018, and it sounds like their families couldn't be happier. In a statement released through Kensington Palace, Markle's parents, Thomas Markle and Doria Ragland, said that they were "incredibly happy for Meghan and Harry" and that they "wish them a lifetime of happiness," while the Duke and Duchess of Cambridge also offered their well-wishes, and said, "It has been wonderful getting to know Meghan and to see how happy she and Harry are together." Most importantly though, the Queen has also given the couple her blessing: Kensington Palace shared that Queen Elizabeth and Prince Philip are "delighted for the couple and wish them every happiness."

While the timing of the announcement was somewhat unexpected, the news itself wasn't exactly a surprise — particularly since the very private couple has become much more visible in recent months. In September, Markle and Prince Harry made their first official appearance together at the Invictus Games in Canada, and in an interview with Vanity Fair in October, Markle told the magazine that she and Prince Harry were "two people who are really happy and in love." The same month, Markle was invited to have tea with the Queen at Buckingham Palace, according to The Telegraph, and most recently, the actress reportedly finished filming her final season of Suits, which suggested an engagement announcement was likely imminent.

According to Clarence House, Markle and Prince Harry got engaged earlier this month in London, but for months rumors have been swirling that the royal had already proposed to Markle during a trip the two took to Africa in August. As romantic as that might sound though (Prince William famously chose to propose to the Duchess of Cambridge while on vacation in Kenya in 2010), given that the couple ultimately needed the Queen's permission to become engaged, it makes sense that the proposal came after Markle met the monarch in October. Not to mention that there were also scheduling issues to consider: Darren McGrady, Princess Diana's former head chef at Kensington Palace, told Hello! earlier this year that an engagement announcement likely wouldn't come until December, due to other important dates on the royal calendar. McGrady said,

With Princess Diana's 20th anniversary [in August], they can't trump that. And then November is the Queen and Prince Philip's platinum wedding anniversary so they can't trump that either, whereas December they can announce the engagement and they'd be free to marry next year. I think that's what's going to happen. Meghan can join the royals at Sandringham at Christmas because she'll be engaged and part of the fold.

So what's next for the couple, now that their engagement is official? According to Kensington Palace, the two will make their first public appearance as an engaged couple in a photo call on Monday afternoon, and will also appear together "in a broadcast interview to be aired [Monday] evening UK time." As for Markle, who is already rumored to have left her Toronto home to live in England full-time? Clarence House also confirmed that Markle and Prince Harry will be living at the royal's Kensington Palace residence, Nottingham Cottage.

Of course, even with the news of a spring wedding, there are still so many questions left unanswered: where will they marry? Will it be a grand affair like Prince William's wedding to Kate Middleton, or will they opt for something low-key? What will Markle's royal title be? Will Princess Charlotte be a bridesmaid? And most importantly, will we get to watch the nuptials on TV? Given the couple's penchant for privacy (not to mention the fact that Prince Harry doesn't particularly have to go all-out for his wedding the way his older brother did, since he's technically only fifth in line to the throne), it wouldn't be surprising if their wedding was also a quiet celebration. But given the public's interest in the couple's relationship, it seems pretty reasonable to assume that royal wedding watch will be in full swing until they finally tie the knot, regardless of their plans.