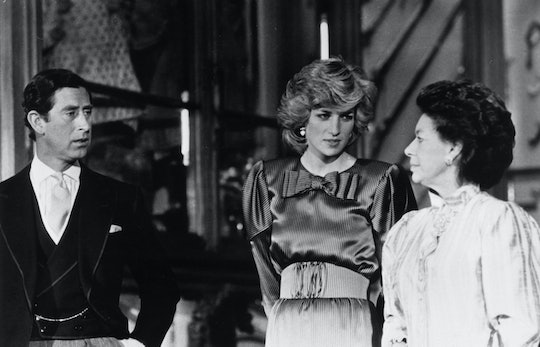 Lady Diana Spencer was just 20 years old when she married Prince Charles, heir to the British throne, in 1981. He was 32 years old. Looking back at video footage of the couple at the time, you can really see how starry-eyed and young Diana truly was in the days leading up to her wedding. She looked like exactly what I imagine she was; a young woman in love and about to marry an actual prince. Of course, we all know things did not end well, but the way that Princess Diana and Prince Charles met and married was sort of a fairy tale so let's go with it, shall we?

Lady Diana Spencer first met Prince Charles when she was 16 years old. Her older sister, Lady Sarah Spencer, was dating Prince Charles at the time but don't worry it wasn't serious. It was so not serious, in fact, that Lady Sarah Spencer (who is now Lady Sarah McCorquodale) once reportedly said that she wouldn't marry Prince Charles "if he were the dustman or the King of England," as per The Sun, so their relationship was rather clearly not on the marriage track. Diana's sister did play a serious role in the story of Prince Charles and Princess Diana, however; she introduced them to each other.

While the two met when Diana was 16, they didn't begin dating until three years later when they both happened to be visiting the home of a mutual friend for the weekend in the English countryside with a big group of other people in 1980. I might not have been there but I imagine it looking like every Jane Austen movie ever. Apparently Prince Charles was there playing polo and caught the eye of Lady Diana, who was a part-time nursery school teacher at the time, as per Business Insider. She clearly caught his eye as well since he invited her out for a sailing weekend on the royal yacht Britannia, as per British Royals Info, a pretty major first date that would be tough to top.

For the couple's second date Prince Charles whisked Lady Diana away to the royal family's vacation home, Balmoral Castle in Scotland (which is how one tops a first date on a yacht, I suppose), and from there the royal romance blossomed. The couple went on to get engaged six months after their first date in Feb. 1981, with Prince Charles saying in an interview he was "amazed" that the charming Lady Diana Spencer accepted his proposal, as per The Guardian:

I feel positively delighted and frankly amazed that Di is prepared take me on.

As romantic as all of this sounds, there were some problematic themes going on behind the scenes. The pair reportedly only met just 12 times before getting married, as per The Daily Mail, and when Prince Charles was asked if he was marrying for love in an interview with the BBC he replied "Whatever love means."

Princess Diana, on the other hand, replied, "Of course."

The rest, as they say, is history. The two married in July 1981, welcomed two sons (Prince William and Prince Harry), and went on to struggle with their marriage until their divorce was finalized in 1996. Just one year later, Princess Diana died in a car crash in Paris, France in 1997.

Not all fairy tales have happy endings, it seems.