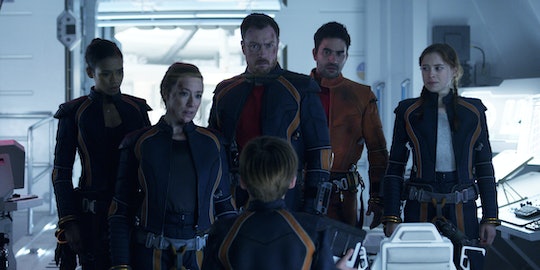 Here's How The Original 'Lost In Space' Ended

When you remake a classic TV show, it can either go incredibly well or stray almost too far from the original to really compare to it. Netflix’s Lost in Space faces the same dilemma. Though it has the same general premise as the original series, that doesn't mean it'll be an exact replica, by any means. However, not everyone has watched the the 1960s version to be able to compare the two projects. So how did the original Lost in Space end? It could offer up some clues as to what the endgame will be for the reboot.

For those who might not be familiar with the story, the series centers around the Robinson family who board a spaceship headed for another planet to begin a new life, away from Earth, which is starting to deplete in resources. The spaceship ends up going off course and soon, the Robinsons and their two crew members become, well, lost in space. (Hence the title.) While the new series seems like it will be a fast success on Netflix, the original actually ended in an abrupt way with no real conclusion to the overall story. Instead, it was like any other season finale, as it wasn’t known at the time that the show wouldn't be picked up by the network for another season.

Since the original series was actually cancelled following its Season 3 finale, it wasn’t given a proper send-off to satisfy fans. In fact, it ended in a way that any season finale in the middle of a show’s life span might end. During the third season of Lost in Space, much of the episode-to-episode plot revolved around the Robinsons and their space crew traveling to different planets. By this time, it was clear that they wouldn’t soon be going back to Earth and the excitement for viewers was more in watching the family explore new worlds and new creatures who inhabited those worlds. So when the Season 3 finale came around, it was an episode about the family landing on yet another mysterious planet.

If it had been given a proper finale, the original Lost in Space might have ended with the family and their space crew headed back to Earth, with their robot and all. Although the show might have inadvertently been in competition with the original Star Trek series for viewership, it clearly wasn't known at the time that the series wouldn't be returning for another season, since the finale really didn’t end in a special way or with any resolution to the whole being lost in outer space thing.

There is an episode in the series where Dr. Smith, who is essentially a stowaway on the ship, travels back in time to Earth to prevent himself from ever leaving in the first place. But when it’s revealed that his decision to board the ship is actually what prevented the Robinsons from crashing rather than simply being thrown off course, he doesn’t alter the events of the series. But it does offer the possibility of the space travelers returning home somehow if the show had gotten the opportunity to have an actual series finale.

Netflix’s Lost in Space is an updated version of the original in every sense of the word, complete with the kind of special effects that TV and movie watchers have come to expect from sci-fi content. Even better, the matriarch of the family will play a much more pivotal role as a scientist. How else it will differ from the original has yet to be determined, but if Netflix has created another successful TV show out of the original story of the Robinson family, then we probably have several full seasons of space travel ahead of us.