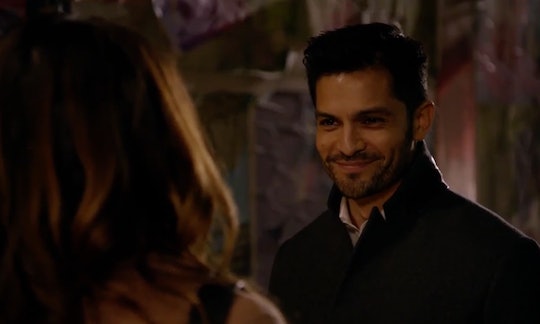 When it comes to How to Get Away With Murder you never know what to expect, and that was proven during last week's midseason premiere. After it was revealed that Frank killed Dominic, Frank also discovered there was a voicemail from Wes on Dominic's phone. So how did Wes know Dominic on HTGAWM? There are plenty of possibilities.

At the end of the episode, fans heard Wes' voice (did anyone else cry?) on Dominic's phone, before the scene cut to a flashback. It was then that viewers saw a scene they'd witnessed once before last season, but it made a little more sense with this newfound information. After leaving the police station, without snitching on Annalise and the rest of the Keating Five like everyone thought he would, Wes successfully evaded Frank who was tailing him and got into a cab, presumably to go to Annalise's house.

On the way there, he ignored a call from Laurel and then scrolled through his contacts to the name "IN CASE OF EMERGENCY," called the number, and then used his real name "Christophe." Back then, the show made it seem like he had called Nate, who was waiting in the house for Wes when he arrived. However fans now know that's not true at all.

For some reason, Wes called Dominic and said that he was in trouble and that "we all could be." While one could assume Wes meant the Keating Five and Annalise when he said "we," now that it's known he and Dominic knew each other well enough for Dominic to know Wes' real name, one has to wonder if Wes meant a different "we" entirely. Like say, maybe him, Dominic, and Laurel?

Could it be possible that the reason Dominic was at the house wasn't originally to kill Wes, but to help him? Laurel said herself that Dominic didn't necessarily want to be a bad guy, but he just always did what he was told. He even warned Laurel not to go through with her plan to try to get revenge on her father, Jorge, because he knew what Jorge was planning. Perhaps Dominic was just doing the same thing for Wes, but Jorge got wind of everything and he ordered Dominic to kill Wes.

That still doesn't really explain how Dominic and Wes knew each other in the first place. Except perhaps it does. All we know about Dominic thus far is that he was Laurel's childhood friend and he'll jump when Jorge says he should. But Jorge and Laurel aren't his real family, so does Dominic have one? Perhaps it's possible that, just like Wes, Dominic lost his family and also grew up in the foster care system. Maybe the two of them crossed paths at some point in their lives when they were kids and kept in touch over the years. That would explain how Dominic knows Wes' real name.

However, if that's true, wouldn't Wes have known about Dominic's connection to Laurel? Maybe he did, but he just didn't say anything, because what would've been the point? As far as Wes knew, Laurel wanted nothing to do with her father and Dominic was clearly tied to him. Moreover, maybe Wes feared if Laurel knew about his history with Dominic she would want to distance herself from Wes, seeing him as a connection to her own dark past. Who knows?

Regardless, there's obviously still a lot we don't really know about Wes and Dominic and what really brought them together that night. One thing's for sure, everything we thought we knew about Wes' death just totally changed, leaving many to wonder if he's even really dead at all.

Hopefully we'll get more answers in this week's episode. How to Get Away With Murder airs Thursdays at 10 p.m. EST on ABC.