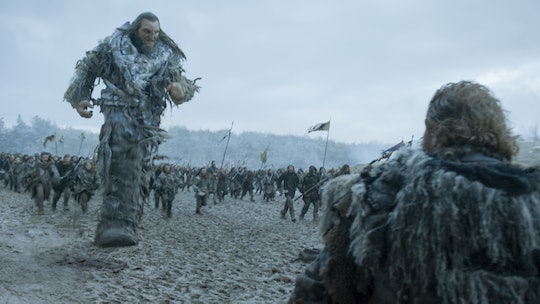 Wun Wun's Chilling Fate Was Revealed On 'Game Of Thrones'

In "Dragonstone," the first episode of Game of Thrones Season 7, viewers got a glimpse of the White Walkers' growing army of wights during one of Bran's visions. Wights are reanimated corpses. Among them was an immediately recognizable figure: Wun Weg Wun Dar Wun, also known simply as Wun Wun. He was a giant who had lived among the Free Folk and been integral in helping Jon and Sansa take back Winterfell. He was killed by an arrow to the eye, after he'd already been riddled with arrows by Ramsay's men. That was the last time Wun Wun was seen onscreen in Season 6, so how did Wun Wun become a wight on Game of Thrones? This turn of events may have left a few diehard fans confused.

Wights are created when a White Walker touches a corpse and brings it back to life. They are essentially just zombie soldiers, without even the sentience or intelligence of White Walkers, and they can be recognized by their icy blue eyes. While they are difficult to defeat (cutting off an arm or even a head won't slow them down), they are highly flammable and can be destroyed by burning. With so many dead in Westeros, the White Walkers are constantly able to replenish their wight army. But it's less clear how Wun Wun came to be part of that army of the dead.

That could be because it hasn't happened yet. Wun Wun the wight was spotted in one of Bran's visions, and it's difficult to pinpoint when in time that vision was. Bran has been able to see things that are happening in the present far from him, but he can also see the future. It's possible that Wun Wun has not become a wight yet and Bran was seeing future events, so the explanation for Wun Wun's transformation will be revealed in later episodes.

While any dead person can become a wight, location makes Wun Wun's change confusing. He died well below the Wall at Winterfell and so far White Walkers only seem to exist beyond the Wall in the far north. It's unlikely Jon had Wun Wun's body shipped back, so he would probably be buried near Winterfell. For him to become a wight, a Walker would need to have journeyed close enough to the Stark castle to revive him. If that happened, it would probably mean the Wall had fallen, unleashing the hordes of the undead on Westeros.

It may not be clear how exactly Wun Wun became a wight, but it's clear what it means: the White Walkers are only getting more powerful and their numbers are growing. One day they'll march into Westeros and one can only hope that Jon will be prepared to face them.