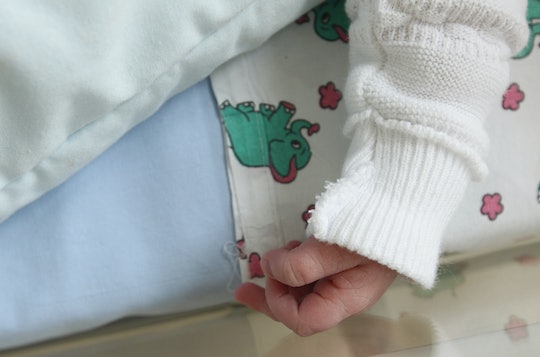 The Facts Behind The Spike In Infant Syphilis

When you hear the word syphilis, what comes to mind? Probably not babies, right? Because when I think of syphilis, I know I think the sexually transmitted disease as something from years ago, something preventable... and something babies don't ever have to worry about. I wish I was right. Unfortunately, the Centers for Disease Control and Prevention has recently noted an alarming rise in babies born with syphilis, and it's a serious cause for concern.

There was great hope for syphilis elimination in the United States. Unfortunately, our national data now show that syphilis is thriving.

Why have the numbers behind congenital syphilis, which is preventable, been on the rise in recent years? Bolan and other health professionals have been studying the potential role that poverty, a lack of sexual health education, and reasonable access to health services may have had in the spike in syphilis cases, particularly in women. "Rises in women, especially women of reproductive age ... are a bellwether for when we are going to start seeing more congenital syphilis," Bolan said.

While it is recommended that all pregnant women get tested in their first trimester for syphilis (and potentially more often throughout their pregnancy if there are many cases on the area, or they are at higher risk of contracting syphilis), many women simply don't have access to prenatal care. This could be one of the reasons syphilis continues to be largely untreated, and why there are mothers who not only don't realize they have syphilis, but also that they could pass it along to their unborn child, according to She Knows.

Some health care professionals worry that these women will have even less access once President Trump's administration moves forward with its plan to repeal the Affordable Care Act and defund Planned Parenthood on a national level. Less funding means even less access to women's health care services.

Women who think there could be a possibility that they have contracted syphilis should seek out a health care professional right away.