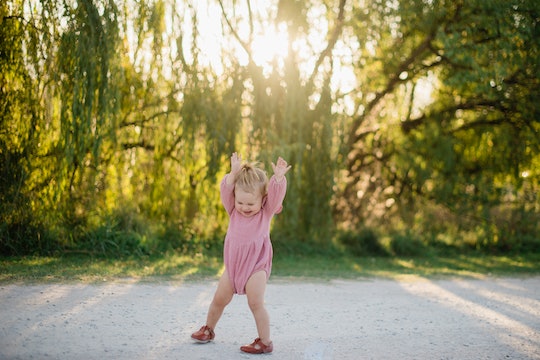 No, But Seriously — How Do Babies Just *Know* How To Dance?

I’ve been playing music for my son since he was in my belly, and now he’s still very interested in instruments, singing, and dancing at 2 years old. He even danced when he was an infant, which made me wonder how babies even know how to dance to music. Is it instinctual or learned? It’s pretty miraculous when you think about it, and too adorable to watch your baby rock and bop to the beat.

Pediatrician Gina Posner tells Romper there are still studies being conducted to find out why dancing has evolved in humans. Though according to Nicole Arzt, a licensed marriage and family therapist, some research already shows that our “response to music may actually be biological, which means dancing and rhythm may come naturally.” Pediatrician Daniel Ganjian adds that children can recognize music as opposed to random noise as soon as they’re born, however, they don’t do true “dancing” until they’re at least 6 months old.

Robin Neuhaus, a PhD student in early childhood education, echoes Ganjian and says that newborns are sensitive to music, however, it takes a lot of time and practice to be able to coordinate body movements to match the beat of a song. And some of us are still learning, am I right?

“One study found that 6-month-olds ‘danced’ along to infant-directed speech, also known as baby talk. At that age, babies have a strong preference for this type of speech because of the exaggerated changes in pitch and elongated sounds. That doesn’t necessarily mean that they think that baby talk is music, but it has a musical quality to it, so it makes sense that they would dance along to it. Older babies dance more to music than to any type of speech,” Neuhaus says.

So apparently, it is biological for babies to “bop” and move to music. But parents also influence their babies dancing to music, according to Ganjian. “True dancing is generally learned from parents who move their bodies, heads, and hands when music starts. Kids will often see parents clapping and will try to either clap or move their bodies to the music.”

Other than it being super cute to see your baby dancing to music, other benefits to playing music for your child include help with speech development and it can potentially be soothing, according to Posner. And that soothing factor depends on what you play for them. While Ganjian says softer music for babies is better than rough music, and music without words or slow words is better, Arzt says that all music can be beneficial.

“Mothers have known this for centuries — it's why we sing lullabies to our children to help them fall asleep. Babies typically enjoy the music their parents enjoy listening to, so there's no reason to focus on listening to just ‘baby music,’” she says. Neuhaus adds that live music has added benefits compared to recorded music, according to studies. If a parent sings their baby a lullaby, it relaxes the baby, reduces the parent’s stress levels, and helps with bonding.

Other benefits in addition to bonding with your child as you sing and dance with them include exposing them to different sounds and helping them self-soothe, according to Arzt. “Beyond just the academic benefits, music grounds us in our culture. Whether it’s a genre of music that it’s important to our community or a song that a class of kindergarteners shares, music connects us to one another,” says Neuhaus.

Whether it's learned from us, or it's instinctual, I think we can all agree that a baby dancing is too cute and pure for this world.