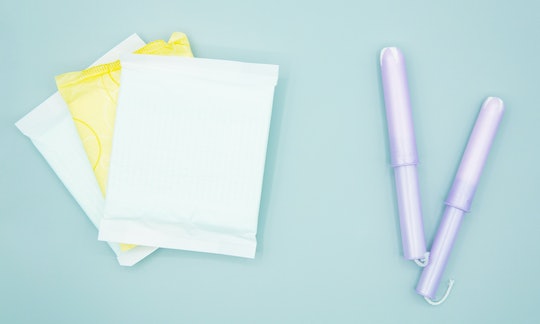 Periods are weird. For years, my period was as regular as the tides, but then, after I had my children, they began to get all sorts of wonky. They started coming at highly irregular intervals and when it came to having a second child, this was a nerve-wracking element to add to an already fraught period in my life. I mean, how do I know if my period is actually late, or if something else is afoot, like I've ovulated later or something else?

Most women experience their periods at fairly regular, near month-long intervals, according to an interview with NPR and Dr. Lawrence Nelson of the National Institutes of Child Health and Development. While periods may be late for a number of reasons, like pregnancy or stress, consistently irregular cycles or cycles lasting longer than 35 days should be investigated, noted Nelson in the interview. He said that the only way to determine with 100 percent certainty why it is that your period has come later or not at all — when you're not pregnant — is to receive a full workup by your OB-GYN.

This may sound extreme, and it is something done out of an overabundance of caution, but because of the risks associated with hormonal complications — like decreased bone density and premature ovarian failure — it needs to be evaluated and treated sooner rather than later.

According to Netdoctor, there isn't a correct time in your cycle to ovulate, and just because you ovulate, and therefore menstruate later, doesn't mean you're any less likely to become pregnant than if you ovulated exactly at day 14 of your cycle. However, according to the Journal of Fertility and Sterility, women with polycystic ovarian syndrome are more likely to ovulate later or not at all, and their cycles tend to be highly irregular, often painful, and accompanied by myriad other symptoms like excessive hair growth, weight gain, and mood swings.

This is all well and good, but how do I know if my period is actually late, or if I'm ovulating later? There are apparently a few things to look for, according to The BMJ. One is the obvious — are you pregnant? That's a simple test and simple clarification. But as far as late ovulation goes, you'll need to get a bit more Sherlock.

The first step is to observe the changes in your own body. Ovulation can be easily recognizable if you know what to look for. The first is to monitor your cervical mucus. The cervical mucus that accompanies ovulation looks and feels a lot like egg whites. There is also basal body temperature measurement that can predict ovulation in some women. According to BMJ, most women will ovulate somewhere between day 10 and day 17, but ovulating earlier or later isn't exceedingly uncommon. It all has to do with the amount of progesterone in your body at any given time.

However, if you're feeling off or you're not noticing any of the tell-tale signs of ovulation, it might be time to see a professional. While it's likely not a problem, and may be as easily explained away as simple stress or the byproduct of changing or eliminating birth control, there is another reason that it might be happening and that's something called premature ovarian failure, or primary ovarian insufficiency (POI). According to the Mayo Clinic, POI affects one in 100 women worldwide and is a primary factor in early-onset menopause. It occurs when the body stops producing enough hormone to stimulate ovulation and your menstrual cycle, causing extended or missed cycles. It's a potentially devastating diagnosis, so getting an evaluation is key.

No one likes going to the OB-GYN, but unfortunately, it's a burden and a necessity that we all must bear.

More Like This
Infertility As A Stepmom Means Double The Alienation, But So Much Love
These 4 Sleeping Positions Will Keep You Comfortable After A C-Section
Everything You Need To Know About Postpartum Blood Clots
Abbot's Formula-Producing Plant Can Reopen In As Early As 2 Weeks — Now What?