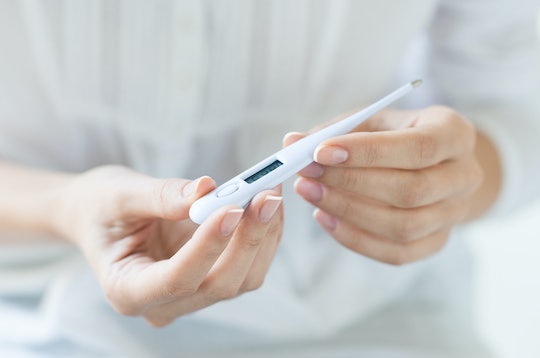 Here's How Checking Your BBT Can Help You To Conceive, According To Science

When I was growing up, I watched Married With Children religiously. For a brief period of time in the sixth season, neighbors to Peggy and Al, Jefferson and Marcy, were trying to conceive (TTC). Marcy would scream for Jefferson "My temperature is perfect!" At the time, I had no clue what that meant for making babies. Now, after several rounds of TTC myself, I know she was measuring her basal body temperature for fertility. But, how does your basal body temperature tell you that you're ovulating? Are you hotter when you're ovulating? Cooler?

In the era of modern thermometry, we can note even minute changes in the body's temperature. The basal body temperature is the temperature of your body when you're fully at rest. During your ovulatory cycle, your body produces something called luteinizing hormone (LH), which is the hormone responsible for the release of the egg into the fallopian tube. During the period of time when your body has the maximum amount of LH coursing through it, around ovulation, there is a dip in the basal body temperature, followed by a slight increase in temperature, according to The Journal of Fertility and Sterility. The temperature change noted is usually somewhere between .2 and .4 degrees Fahrenheit or between .1 and .2 degrees Celsius, noted the journal.

So how does your basal body temperature tell you that you're ovulating? It signals a shift in your hormones during what is referred to as your circamensal rhythm, according to scientists at Thorne Research. The circamensal rhythm is the pattern of your basal body temperature that is equal to the length of one menstrual cycle. The acrophase, the period during which you're the hottest (and it didn't even require you to do your hair), happens late in the luteal cycle, typically the day after you ovulate, which is why you're watching for a dip that proceeds it, or charting for a period of time to be able to predict when the shift typically occurs.

According to The Mayo Clinic, it's extremely important to take your temperature at the same time every day, as soon as you wake up, before you do a dang thing. Keep your thermometer beside your bed. It's also important to take it in the same location. You can take your temp orally, rectally, or vaginally, but please, please be careful with glass thermometers and your private parts. I can imagine getting startled while taking your temperature via your vagina and having things end terribly. (That is not where mercury and glass belongs.) Also, be sure to sanitize after every use, and if you do use a mercury thermometer, shake it out before you go to bed the night before.

While calculating, measuring, and charting your basal body temperature is useful for some women, it's by no means the gold standard of fertility or ovulation tracking. According to Comprehensive Physiology, not all women experience a noticeable shift in their temperature during their cycle, and also, there are other potential reasons for the shift in temperature from illness to environmental reasons.

The tried and true standard for measuring ovulation is by employing the use of over-the-counter ovulation predictor kits (OPK), which determine the presence of your ovulatory hormone in your urine. The price of these have really come down since I started using them 10 years ago. They're often paired in kits with pregnancy tests for ease of use and expediency. If you're still considering charting your basal body temperature, it might behoove you to invest in a tracker app for your phone where you can input and document many physical changes like your basal body temperature, as well as cervical mucus and sexual activity, to give you a broad range of quantitative data to determine what is or isn't working. After all, you might be charting to get pregnant, or it may be just the opposite for you. Either way, details count.

More Like This
A Mother’s Day Garden Of Grief
Infertility As A Stepmom Means Double The Alienation, But So Much Love
Should You Be Giving Your Toddler Melatonin To Help Them Sleep?
These 4 Sleeping Positions Will Keep You Comfortable After A C-Section