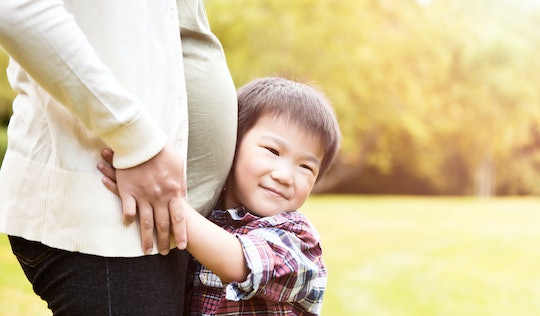 My son was 3 years old when my daughter came along, and it was ... challenging. 3-year-olds are not exactly known for their love of sharing or their long periods of silence. Plus, you're their entire world, and now you're disrupting it. If you're wondering, "How do I prepare my toddler for a new baby?" you're not alone. And honestly, it's not as easy as telling them there's a baby on the way — both of you need some preparation.

My son is pretty flexible, as far as kids go. He is a born New Yorker. He rides the train, tips the tardy delivery guy, and knows that at any moment, his day could go sideways because some jerk threw their garbage on the train tracks, and now we can't get to zoo. In my naiveté, I thought that his laid-back attitude toward disruption would make accepting a new baby easier on him.

I also believed in the tooth fairy at one point and that Monica and Rachel could afford their huge apartment in Manhattan, so apparently, the joke was on me. While my son didn't charge her crib and demand the baby bend the knee, he did let me know in no uncertain terms that the tiny crying thing was unwelcome and really crimping his style. Also, she frequently smelled. "Would you please give her back to your belly, Mama?"

With the help of some moms more experienced than I, and my very understanding pediatrician, we were able to grow as a family. Now, at 9 years old, he only occasionally asks to send his 6-year-old sister back from whence she came, and it's normally after she's tattled, so there's that.

According to the Mayo Clinic, there are a few precautions you can take if you, too, are wondering how to prepare a toddler for a new baby. The first thing you can do is to keep your toddler aware. Sure, I told my son that he was getting a little sister, and even asked him what we should name her (Lightning McQueen), but the dialogue was limited. That was a mistake. The Mayo Clinic says that you need to talk to them about when they were a baby, and what it will be like to have a baby around.

The Cleveland Clinic also suggested getting your toddler a baby doll and working with them with the doll about how to hold and approach the baby. Work with your little one on how to be gentle, and what changing a diaper will be like. The article also recommended looking into sibling readiness classes that you can take with your child. Barring that option, there are lots of great shows available, like Daniel Tiger, which feature what it might be like to have a new baby enter the family. Granted, if you're like me, you are probably tired of your kid's shows, but they can help. Hey, if it weren't for some of those episodes, I'd probably never have thought about not biting my friends.

Cleveland Clinic also suggested getting the baby's sleeping and play areas set up as soon as possible so that your child can see where the baby will be spending time. Let your child see the crib and the stroller, and allow them to explore. My son thought the crib was coming back for him, and he threw a fit. When we explained that the baby would sleep in it, he let us know we needed to fill it properly with binkies.

You can also let your toddler pick out a special present for the baby (and get them one as well) to give when you all come home. A sense of connection is the strongest part of your parenting arsenal when it comes to how your toddler will accept your new baby.

Raylene Gonzales, 31 and a mom of three, tells Romper that she had her older siblings each pick out outfits for the youngest baby, and they also got to help decorate the baby's room. "Their room is all monster trucks and football, so I was a bit worried about what they'd want in their sister's room, but they did great. They picked out lots of animals and only a few monster trucks." Which, I know I would've loved, and also my daughter, who frequently stages terrifying theatre surrounding Barbies and her brother's aircraft carrier and truck toys.

Make sure your toddler feels like a special part of the family puzzle, too. They're the older sibling, so let them know just how big a deal that is. (Avoid telling them how it also means they'll inevitably have an earlier curfew and stricter regulations as a teenager. Not that I'm an older sibling who remembers this vividly or anything, but guess who has more baby pictures? Oh yeah, yours truly.) Haley Lenon of Pittsburgh, Pennsylvania, 34, tells Romper that she and her son made special t-shirts to wear once the baby was born. His read "big brother," and another read "special helper." "We went out of our way to make sure he felt like he was needed and included, even if it wasn't always easy," Lenon says. "We gave him new 'big brother' chores as well as toys and allowances his little sister wouldn't be getting. We tried to make him feel as special and important as we could without making him feel responsible for his sister."

Understand that your toddler will probably still get jealous at some point. That's normal. The website for Dr. Sears noted that it's best to acknowledge your toddler's jealousy, and let them know you understand. When your baby arrives, there's an entirely new set of things to deal with, but those issues should be mitigated provided you've prepared your toddler for the newest family member's arrival. There will be a learning curve, but as long as everyone in the family is on board with making sure your toddler feels just as special as they always have, it should (eventually) be smooth sailing. Now to tackle getting both of them to nap at the same time.