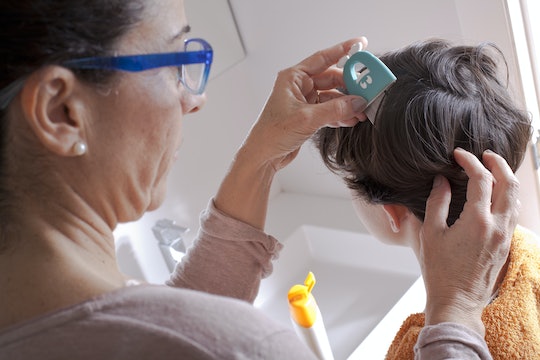 You Might Be Totally Wrong About How Kids Catch Lice

There's no way around the fact that being a parent is just plain gross a lot of the time. From changing diapers and sucking snot out of little noses to tackling viruses and gnarly boo boos, moms are forced to do all kinds of stomach-turning stuff... but dealing with lice is definitely one of the worst. Everything about the experience is just awful: the itching, the endless laundry, the scrutinizing of every strand of hair on your kid's head. If you've done it, you live in fear of having to do it again. But how do kids catch lice in the first place?

Since you were a kid yourself, you've probably heard a million different myths about how the annoying little critters spread. I remember panicking as a kid during the annual lice check at school when the nurse found lice on the head of the little girl who sat next to me (the popular belief among my classmates was that lice could jump). You can imagine my relief when the bugs spared me, but as it turns out, lice can't actually jump (and they can't fly, either). As Kate Shepherd, founder of the lice education group Lice Solutions Inc., told Parents, what lice can do is travel super fast — nine inches in one minute. (That's fast for a teensy insect.) And as long as two people have their heads close together, lice have a method of getting from one host to another that's almost like a parasitic circus trick: It will use its six hooked legs to grab onto a strand of hair and ride over to the new person. (On second thought, that sounds more like the thing Tarzan does when he swings from vine to vine than a circus trick.) For this reason, direct person-to-person contact is the easiest way for lice to spread.

Unfortunately, direct contact isn't the only way for lice to spread. When lice crawl or the nits attached to shed hair hatch, they can get on shared clothing or belongings and spread that way, according to the Centers for Disease Control. Hats, scarves, coats, sports uniforms, hair ribbons, and barrettes are all common culprits listed by the CDC, as well as combs, brushes, towels, and even stuffed animals recently used by an infected person. Want more bad news? You can even catch lice from lying on a bed or couch or leaning back on a pillow that's been exposed (I have a friend whose daughter got lice from an airplane seat, which is a very real possibility).

There is some good news hidden in that bad news, though, which is that lice don't survive for very long on jackets or bedding or anything else that's not alive.

“While head lice can live off of the scalp for a little while, it is not that long. Typically, head lice can survive off of the head for about 24 to 48 hours,” pediatrician Katie Meyer, M.D., told Reader's Digest. “So they aren’t going to lay dormant in furniture, clothes, or bedding.”

In other words, you won't have to pull a Velveteen Rabbit and burn all your kid's stuff to make sure the lice are gone for good. But you still want to do everything in your power to prevent a lice outbreak in your home. When the nasty visitors are making their way through your kid's class at school, one thing you can try (if your kid has long hair) is to put it up as often as possible. "Buns are great, but even braids and ponytails will help minimize the surface area that long, flowy hair will touch in a given day," according to Everyday Health. Spraying lice repellant on your child's hair and/or using lice-repelling shampoo as part of the daily routine is another option worth trying.

Perhaps most importantly of all, encourage your kid to avoid head-to-head contact with classmates, as recommended by the Mayo Clinic. Also make sure she knows that it's not a good idea to share hats, scarves, coats, headphones, or any hair accessories/styling tools.

Finally, don't forget to check out the classroom for yourself. If you notice that hats and clothing for more than one kid are hung on the same hook, for example, ask the teacher about possibly finding another coat-hanging system to use (at least until the lice outbreak passes).

If, despite all your best efforts, those sneaky suckers still take up residence on your kid's scalp, don't despair. Lice don't carry any diseases (like malaria or Lyme disease), so in a weird way, you're better off getting lice than a tick.

It just won't feel like that at the time!