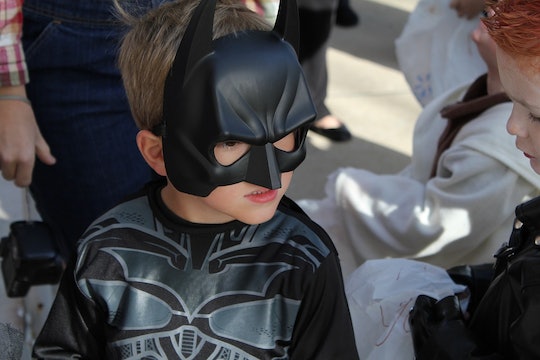 It May Be Time To Retire The Cape, Parents

I have owned, at any one time, at least 10 Superhero costumes. Always a few variations of Batman, of course; the classic grey and black, the new, sleeker Christian Bale version. Superman never really seemed to take off at our place, but Spiderman costumes were always on hands, as well as all requisite side kicks. I thought I was being a cool mom to my kids; turns out I was wrong. A new study has linked aggressive behavior to superhero culture, so I guess it's time to retire the capes.

A recent study published in the Journal of Abnormal Child Psychology found that, while some traits of archetypal superheros are being picked over others by little boys looking to emulate them. Researchers from Brigham Young University found that children tended to pick up on the aggressive nature of superhero characters like Iron Man, Captain America, and Superman. Brigham Young University professor, Sarah M. Coyne, the study's lead author, wanted to look into the effects of exposure to the superhero archetype (defender of justice, protecting the weak, etc), and made a surprising discovery:

So many preschoolers are into superheroes and so many parents think that the superhero culture will help their kids defend others and be nicer to their peers, but our study shows the exact opposite. Kids pick up on the aggressive themes and not the defending ones.

The study looked at 240 children, both individually and through questionnaires filled out by their parents to get a sense of their level of engagement with superhero franchises (how many movies had they seen, which superhero they most identified with, etc). When the children were spoken to in a one-on-one setting, they were asked to list their 10 most popular characters. Ten percent of respondents told interviewers they based their favorite superhero because of defending behaviors, like "he shoots webs and saves people."

A further twenty percent admired aggressive behaviors, saying things like "Because he can smash and destroy everything, and he doesn't care because he's a big bully."

The rest of the children, a full 70 percent, felt superpowers were the best thing about superheros (obviously, because they are).

How their favorite hero uses those superpowers, generally to defend someone who is being bullied or to protect the weak, did not always translate with kids. Dr. Coyne told Global News that the more a child was exposed to superheros, the more aggressive they were as they grew older.

Kids into superhero culture were more aggressive within the next year, suggesting they’re learning from the media.

This isn't the first time Dr. Coyne lead a study to expose the way media stereotypes affect children; in July, she published a study about the way Disney princesses change the way little girls were viewing themselves. According to the research, overexposure to the princess culture left little girls focused on unrealistic body expectations and damaged their confidence. Dr. Coyne released a statement at the time:

Dr. Coyne has pointed out that, in both cases, moderation is key.

Have your kids involved in all sorts of activities, and just have superheroes be one of many, many things that they like to do and engage with.

So don't put away that cape or tiara just yet, I guess; simply give them a break every once in a while.