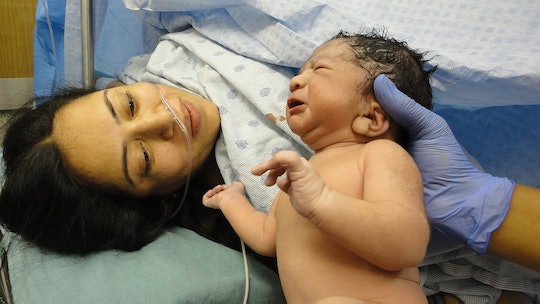 How Do They Do A C-Section?

As someone who has had a C-section, I can honestly tell you that I have often wondered, "How do they do a C-section?" And by "they," I mean the trained professionals in the hospital, not Carl in an abandoned prison with zombies swarming around. Because my C-section was a game-time decision made by my midwife, I didn't have time to think about what they were doing. I wasn't even nervous, which isn't like me. Instead, as I laid on the table under the lights, I thought about how naked I was to all of the strangers in the room.

I was also hoping I wasn't going to vomit from the drugs.

But, if you're having a C-section, preparing in case you need one, or just want to know what actually happens, I get it. My second baby will most likely be born via C-section, and I'm kind of interested to know how my first baby got out of me. But first, it helps to know why you may need a C-section.

Dr. Kameelah Phillips, an OB-GYN in New York City, tells Romper that there are a few things that could indicate a need for a C-section. "Before labor, a doctor may schedule a C-section if you have a reason the baby cannot pass vaginally, like an obstructing placenta or vessels that could cause massive bleeding in labor," Phillips says. "Prior uterine surgery or a multiple birth could also be a reason for a scheduled C-section." If you've proceeded with labor and then need a C-section, Phillips says the most common reasons include a "non reassuring" fetal tracing. According to the American Academy of Family Physicians, the fetal heart rate is monitored while you're in labor and can be considered "non reassuring" if it's following (or not following) a certain pattern, leading your doctors to believe that it's no longer safe for your baby to continue with labor and intervention, like a C-section, is needed.

Phillips notes that there are some other common reasons for needing a C-section while you're in labor. "If the cervix does not dilate to 10 centimeters, despite attempts to help with dilation, it is not possible to push without causing damage to the cervix," Phillips says. "This is called arrest of dilation. If the cervix reaches 10 centimeters, but the baby is unable to descend on her own (especially with pushing for a few hour), the doctor may also recommend a C-section. This indication is called arrest of descent."

OK, so something happened. Whether it was planned or not, you need a C-section. Now what?

When your C-section is planned, Phillips says that there is time to discuss any concerns about the procedure and weigh the risks and benefits. You also have the comfort of knowing that your support person will be in the operating room with you — that can't always happen during an emergency.

But no matter what kind of C-section you have, your body has to prepare, too. Phillips notes that preparation includes an IV for preoperative hydration, antibiotics, and an antacid to neutralize your stomach acid. The spinal or epidural to numb you is placed once you're in the operating room, and Phillips says that the difference between these two is pretty simple. "In a planned C-section choosing an epidural or a spinal can be influenced by how long the surgeon or anesthesiologist thinks the surgery may take. A spinal is sometimes used for primary C-sections because it will provide relief for the length of the case and post-op recovery," she says. "If the woman was in labor, she may already have an epidural. If she has had multiple abdominal surgeries or C-sections, then an epidural may provide longer relief if needed."

Once that's done, any pubic hair near the incision may be shaved. "Don't worry if you cannot see down below or do not do this prior to surgery — we can easily do it for you," Phillips says. "A bladder catheter is placed after the epidural and you will not feel this. Then, compression sleeves are placed on your calves to help maintain your circulation during the surgery. Just before we start, your belly is then cleaned with a special soap and a drape is put in place to keep the area sterile."

OK. So you've been scrubbed, shaved, and pumped full of fluids. Now it's time to actually have your baby. No panicking, right? You're just having your abdomen cut open to retrieve a newborn from inside of you. (Anybody else feeling like Sigourney Weaver here?) But it's not quite as grotesque as it sounds.

"A majority of C-sections proceed in a similar fashion and begin with a horizontal incision in the skin, fascia (tough protective tissue layer), and uterus," Phillips says. "The rectus muscles are retracted to the side and often do not need to be cut. The skin and uterine incision, however, are influenced by how many weeks you are, prior surgery, multiples, emergencies, and other factors."

When it's time to cut the uterus, Phillips says that a horizontal incision on the lower aspect is typical and preferred. She adds:

After cutting through the skin, tissue, and uterus, how can you be sure your baby is safe from the knife? Phillips says the incisions are taken very seriously and done very carefully. "As we make the incision, the muscle splits into layers that help us recognize when the baby is near," she says. "Once the uterus is almost open, the fingers or scissors can be used to extend the incision further. The scissors also have a blunt tip on one end to prevent injury to the baby."

But don't forget, your baby isn't just in your uterus. They are also in that protective amniotic sac. Once your uterus has been cut, Phillips says the amniotic sac can be ruptured using an instrument or pressure from the fingers are used to create a small defect in the sack.

Sounds totally simple, right? Your doctor will pull your baby from the amniotic sac, and Phillips says the umbilical cord is cut pretty soon after delivery. "Depending on the length of the cord, the cord can be clamped close to the placenta to allow the blood stored in the cord to travel to the baby." You'll get to see your baby over the draping and then they'll be whisked off to be checked out by a nurse. (If you want skin-to-skin or the drape gone, you'll have to talk to your OB-GYN about your options as everybody has different policies.)

While your little one is being weighed and cleaned up, your incision will be closed. According to Phillips, the skin incision is influenced by multiple factors including your weight, prior surgery, and other medical conditions, like diabetes, which may affect how well your skin heals. "Most times the incision is closed with a thin suture that will dissolve on its own in few weeks," she says. "Other times, the surgeon may choose to use small metal staples that will be removed before you go home from the hospital or in the office at your next visit. An absorbable staple is also available and it will self absorb as the skin heals."

See? Easy. You could practically do this at home with your Pinterest project scissors. (Do not do this.) Major surgery is still major surgery, but when you hear exactly what's going on, it's not quite so scary. Talk to your doctor about any specific things you want to happen in the operating room and try not to panic too much — everyone is there to make sure you and your baby are safe. (And God bless your anesthesiologist because they are there for you, too. Props to mine who talked me through the entire procedure and made sure I didn't puke everywhere two seconds before meeting my baby.)