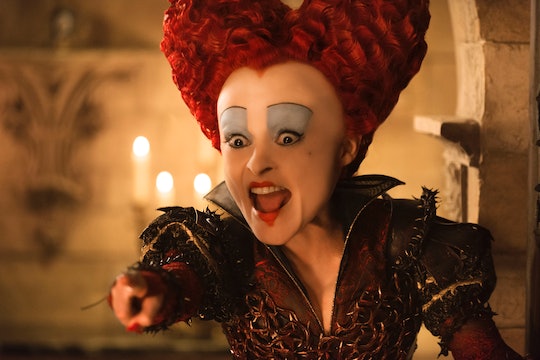 Alice Through The Looking Glass/Disney

How Do They Make The Red Queen's Head Look So Big In 'Alice in Wonderland'? It's Spooky

I have a few questions for Tim Burton. First, why must you always turn my first love, Johnny Depp, into a cartoonish-looking character? It's really hard for me to fantasize about Edward Scissorhands and the Mad Hatter from Alice Through The Looking Glass, Mr. Burton. Also, what do your dreams look like? If your movies are anything to go by, you must wake up exhausted from all the technicolor dreaming, right? And, lastly, how do they make the Red Queen's head so big? Because I've seen pictures of Helena Bonham Carter in real life and her head is basically normal-ish from what I remember.

Although, in my humble opinion, Bonham Carter could have a big head (metaphorically speaking) based on her very awesome career. She has played everything from Bellatrix LeStrange in the Harry Potter series (and can we just take a moment to honor that please?), to a perfect Miss Haversham in Great Expectations, and of course, killing it as the Red Queen. Both in 2010's Alice In Wonderland to Alice Through The Looking Glass, which will be in theaters this Friday. Bonham Carter is pretty famous for not caring about what people think of her or her choices... so, basically the opposite of the Red Queen. Childish, peevish, emotionally stunted and egotistical, the Red Queen is sure to steal scenes again. With or without the giant head.

So how do they get Bonham Carter's head to look so outsized as the Red Queen? Because it looks super real, right? Not surprisingly, Tim Burton has a pretty tight design team for special effects. One of the team members from Sony Pictures Imageworks, Carey Villegas, who created the Red Queen's look, explained to FX Guide how they did it.

Tim Burton's an artist himself, so he was always sketching designs for the characters. His style was to draw them with really large heads and eyes. So we wanted to incorporate his drawing style into the actors playing these characters. For the Red Queen, we really wanted to give her this caricatured feel - this enlarged head and a really tiny cinched in waist.

Villegas went on to explain that the team knew they would need the Red Queen's head to be at least twice the size, but didn't want to blow up photography and lose the resolution quality.

The effort was obviously well worth it.

While Burton has handed over the directing chair to James Bobin (The Muppets, Flight of the Conchords) for Alice Through The Looking Glass, his artistic vision will remain. The dreamy colors, the special effects, the signature look and feel of a Burton production. And Bonham Carter will play the spoiled Red Queen with the oversized head, again, of course.

Honestly, could you imagine anyone else?