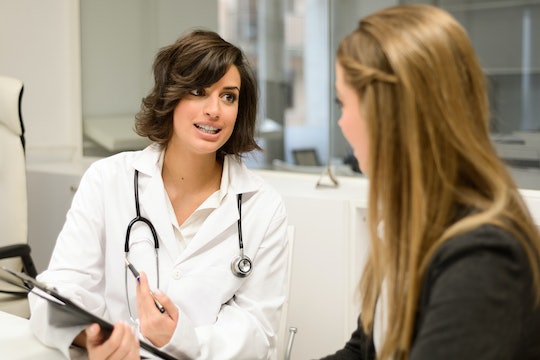 How Do Uterine Fibroids Affect Pregnancy?

An ultrasound, which is part of your pregnancy medical routine, will determine if you have fibroids. The Bump noted that pregnancy hormones can cause fibroids to multiply at a rapid rate. Estrogen and progesterone surge during pregnancy, according to Parents, explaining why the condition is so common during a woman's childbearing years. However, doctors told The Bump that most doctors say that uterine fibroids won't affect pregnancy. When a fibroid that develops during pregnancy, it is possible that it can block the entrance to the fallopian tubes, which will affect subsequent pregnancies, but not the current one, because the fetus is already in-utero.

The Bump also noted that you might be at greater risk for miscarriage, preterm birth, breech birth, C-section, or might develop heavy bleeding post-delivery if you have uterine fibroids. However, the odds are something to discuss with your physician because every case is different, especially with uterine fibroids, which can vary so much in shape, size, and severity.

But the question remains: how to uterine fibroids affect pregnancy. The good news is they won't make things worse. "Common as they are, complications during pregnancy are relatively unusual," Dr. Philip D. Orons, a radiology specialist, told Today. "The most common problem is symptoms in the mom, which can include pain, nausea, fever, vomiting and occasionally elevations of the white blood cells."

They also won't affect the birth process either. Mayo Clinic noted that women can have a live birth with uterine fibroids.There are, however, some complications that may arise. OB-GYN Stacey Scheib told Today that, depending on the location of the fibroid, your baby's position may be adversely affected and could result in a breech birth. Additionally, Scheib noted that if the fibroid is at the lower end of the cervix, it might make a vaginal delivery impossible. Both cases will necessitate a c-section delivery.

Doctors urged women not to worry, as both complications are, and I stress this, rare. Usually, pregnancies are unaffected by uterine fibroids, which will shrink and disappear after the baby is delivered. However, if your fibroids do not go away after your delivery, Scheib and Orons recommended that you speak with your physician about treatment to remove them, either with medication or surgery.

More Like This
OB-GYNs On How The End Of Roe Changes How They Can Care For Us
When Does Pregnancy Horniness Kick In?
Barre Could Be The Low-Impact Prenatal Workout You Need
This Is What Experts Say About Eating Hot Dogs During Pregnancy