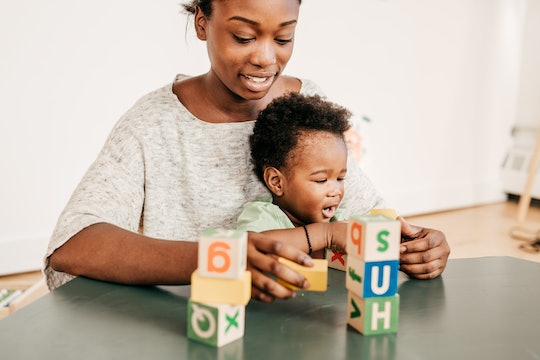 How Do You Know If Your Baby Needs Glasses? An Expert Explains

Babies and toddlers wearing tiny eyeglasses are the cutest ever. But how will you know if your baby needs glasses? I mean, they take a while to focus those sweet little eyes anyway, so what exactly should you be looking for? Pediatricians say there are some signs you can see at home, and that it’s important to bring them up with your child’s doctor. It can help prevent long-term vision issues if you get them glasses early.

Drew Wright, M.D., pediatrician at Children’s of Alabama, tells Romper in an interview that there’s no minimum age required to get your baby glasses. It’s just a matter of what eye troubles they’re having.

“There’s officially not a minimum age — it’s all dependent on what you actually see when that child is evaluated,” he explains. “We start evaluations on newborns the day they’re born, checking on their eyes to ensure there’s no physical problem that would affect their vision. We move to vision screens in the office as young as 6 months of age to make sure we don’t see any issues developing.”

If parents notice specific behaviors, or lack of behaviors, it’s worthwhile to bring them up to your kiddo’s pediatrician. Wright says these are the most common ones:

“A lot of times parents will notice at home that the eyes aren’t working in tandem or there are issues with alignment, and one eye might be drifting, wandering, or not as easily focusing. Another pretty common milestone of vision we see in infants as young as 2 months is that they develop their social smile, because their vision has improved and they can make out their parent’s face.”

Wright adds that if your baby struggles tracking objects — following them with their eyes as you move them back and forth — this can indicate vision trouble. He says babies “should be able to make steady eye contact by about 3 months old.” So, if your baby has reached the age of social smiling or being able to track items with their eyes but doesn’t seem to be, what might be the cause?

“One of the main problems we see is astigmatism, which can lend itself to vision problems later in life. Another thing is making sure their eyes are of equal strength, and the actual anatomy of the eye alignment, making sure they work in tandem and not independently of each other,” Wright says. “For some children, glasses are just to fix their vision. A lot of times it is about intervening with vision issues at a young age so we can decrease the dependency on glasses as children get older.”

If you’re concerned your little one may need their vision assessed, it’s best to take them to their pediatrician first before rushing over to your local eye doctor.

“Start with your pediatrician. We’re able to screen infants as young as 6 months of age. We have some screening devices to essentially take a photo of the eye, and for older children, we have the chart to recognize shapes and letters. If we do find abnormalities, we can get them in to see a pediatric ophthalmologist from there.”