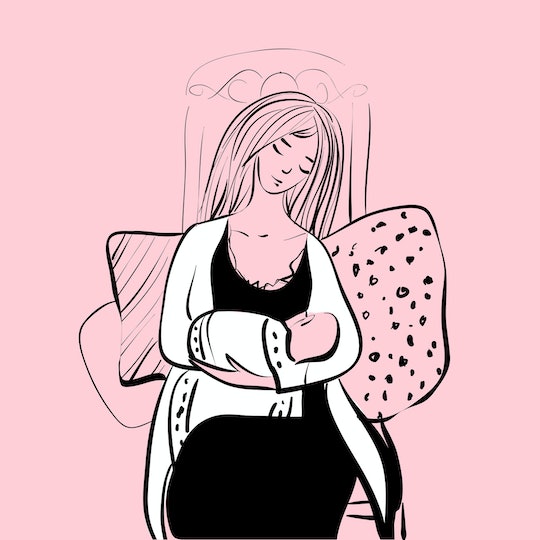 How Do You Know Whether You Should Breastfeed?

Parenting and raising children involves a number of actions, but "making decisions" is pretty much the root of both. Every day as a parent, you're faced with a million decisions that all relate to how you're parenting and raising your child, and they all start when you're pregnant. It's a lot of instinct, sure, but making decisions isn't easy and I think every parent has wished there were a manual. I mean, how do you know which car seat to buy or if you should co-sleep? How do you know whether you should breastfeed?

That last one is a kicker, right? I don't know a single parent who wasn't asked when they were pregnant whether they were going to formula feed or breastfeed (like it's anyone's business). Although I decided to breastfeed, I also know plenty of parents who didn't, and felt like they had to justify the reason behind it.

The same is true for a lot of breastfeeding moms. Breastfeeding may be recommended by all of the medical books, American Academy of Pediatrics, and more, but it's not always an easy decision to make. When you see videos of women breastfeeding their baby being verbally harassed or hear the shaming that breastfeeding moms have to endure because they chose to feed their child that way, it can make any mom feel more comfortable picking up a bottle. I had a lot of well-meaning family members who tried to tell me the benefits of formula feeding, and it all made my head spin. Did I really want to be the only person capable of feeding my baby? Did I want to wake up every two hours when formula could make her sleep longer? Would I be comfortable feeding her in public? Would breastfeeding make me feel weird?

You can read literally tons of literature on why you should choose to breastfeed, but the only way to know whether you should breastfeed is simple.

If you want to breastfeed, then you should breastfeed. Done.

It is your choice. You don't have to justify it by citing all of the benefits of breastfeeding or what the doctors say. If you want to breastfeed, that's how you know that you should breastfeed. It's the only surefire way to make the decision, and it's one you can feel completely comfortable about. On the fence? Then choose later. Know for sure you don't want to breastfeed? Totally fine, add some bottles to your registry.

All you have to do is ask yourself if you want to breastfeed, and that's how you know if you should or shouldn't. If you're at all uncomfortable about breastfeeding or dreading it, you can be sure that nursing your baby won't go over as well as you want. It doesn't matter what the doctors tell you or society — a fed baby is best, and it's up to you if you go for formula or breast milk.

In fact, use that philosophy for all your parenting decisions, and I think you'll be just fine. (Except for like, wondering if you should let your kids play with fire or something. Pretty sure that's an across-the-board no.)

More Like This
30 Marvelous Baby Boy Names That Start With “M”
Everything You Need To Know About Missionary Sex During Pregnancy
Dr. Jill Biden Just Delivered Some Frank, But Powerful, Advice On Motherhood
Reddit Applauds Mom Of Five Who Stood Her Ground & Left Sleeping Dad Behind