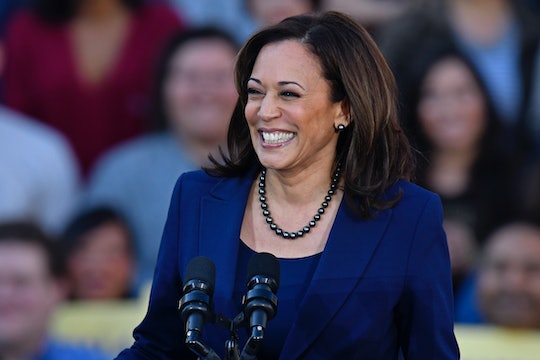 Let These Kids Teach You How To Pronounce Kamala Harris' Name

Now that the 2020 presidential election is well underway and ballots are already being cast, it's probably a good time to refresh yourself on how exactly to pronounce Kamala Harris' name. But don't worry, some adorable kids have broken it down perfectly.

Before she became Democratic presidential nominee Joe Biden's running mate in the 2020 election, Harris released a sweet and silly Kids for Kamala commercial while running for Senate in California in 2016 to teach everyone how to pronounce her name. "It's not Cam-El-Uh," one girl says. "It's not Kuh-Mal-Uh," another kid tells the camera. "It's not Karmel-Uh," one boy sassily states.

It's Kamala, or Comma-la, "like the punctuation mark," she wrote in her 2019 memoir, The Truths We Hold, according to CNN.

Harris' name is of Hindu origin and means "lotus, or pale red; or a garden," according to Name Berry. The vice presidential nominee is the daughter of two immigrant parents. Her father, Donald Harris, is a Jamaican-born economist and Stanford professor, while her late mother, Shyamala Gopalan, was a breast cancer researcher born in India. According to CNN, Harris wrote in The Truths We Hold that the lotus flower is important in Indian culture: "As lotus grows underwater, its flower rising above the surface while its roots are firmly planted in the river bottom."

Of course, President Donald Trump could also use a refresher on how to say Harris’ name. The POTUS has continues to mispronounce the VP nominee's name, even admitting during one campaign rally in September that he does it on purpose. "You know, if you pronounce her name wrong, she goes crazy," he said. "Comma-la, like a comma. It’s like a comma. She’s like a comma."

That same month, during a rally in North Carolina, Trump made an untrue claim that "people don’t like [Harris]. Nobody likes her." He added, "She could never be the first woman President."

Yet, Harris made history in August when she became the first Black and South Asian woman to be nominated for vice president by a major party. The California senator is a champion of paid family and medical leave and has stated that she will fight for the American people as vice president.

She's also a stepmom to two kids with her husband, Doug Emhoff, and "family is everything" to her, she said in a campaign speech on Aug. 12, joking that her kids know her as "Momala." "I've had a lot of titles over my career, and certainly vice president will be great, but Momala will always be the one that means the most," she said.

Whether she's Kamala or Momala, you now know how to pronounce either.

This article was originally published on Aug. 13, 2020