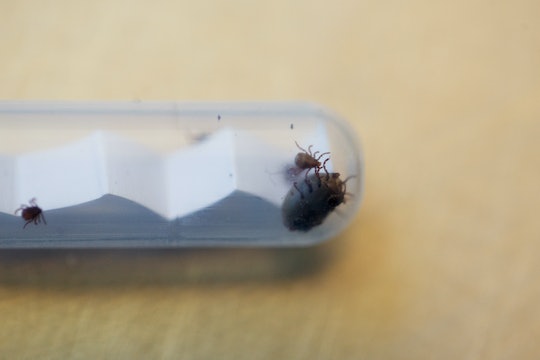 Here's The Exact Way To Remove A Tick From Your Kid, According To Experts

As a kid, I spent my summers fending off one particular sworn enemy: mosquitos. There wasn't (at least to the best of my knowledge) a lot of conversation about ticks and some of the other pesky insects that seem to be making themselves known these days. But the extra conversation surrounding ticks is for good reason — research shows this summer's tick season might be the worst in years. So, what do you do if your little one is bitten by the insect? And how do you remove a tick from a child? There are a few key steps you'll want to take.

"When removing a tick, it's important not to leave any part attached," Janis Reed, an entomology correspondent for Mosquito Squad, tells Romper in an email interview. "You can purchase a tick removal tool or just use a pair of sanitized tweezers to remove the tick, but do not try to burn it out."

Reed says in order to properly remove the tick, you need to grasp it firmly by the head with your tweezers or tick removal tool, then pull straight up — do not twist while removing the tick. "If any part of the tick remains attached, just remove it with your tweezers and then sanitize the bite area," she says. "After removing a tick, it is important to dispose of it. You can put it in a sealed container, wrap it with tape, and throw it away or drown it.

Reed cautions: "Never crush a tick with your bare hands."

Once the tick has been removed, it's important to watch your child for the next several weeks for the following signs:

Call your doctor immediately should any of these symptoms appear. "Other conditions can also cause these symptoms," according to KidsHealth. "But having your child seen early means that if it is Lyme disease, treatment can begin quickly."

Reed says it's important to keep in mind that all ticks do not carry Lyme disease. In fact, there are many species of ticks, but only the black-legged, or deer, ticks carry Lyme disease and only one in every four to five deer ticks carries Lyme, she says.

Nixing the possibility of Lyme disease also depends on how quickly you respond to a possible tick bite. If you can see the tick attached to your child’s skin, then it’s important to remove it immediately, says Dr. Nancy Troyano, entomologist and Director of Technical Education and Training for a family of pest control brands, including Western Exterminator, Presto-X, and Ehrlich.

“Every minute the tick is attached increases the chance of pathogen transmission, should the tick be infected,” Troyano tells Romper in an email interview.

Be sure to also check your kids in easy-to-miss spots after they have spent time outdoors, Dr. Valerie Goldburt, a dermatologist with Advanced Dermatology, PC in New York, tells Romper in an email. Areas that often go missed are between the legs, in and around the hair, and even inside the belly button, according to the Centers for Disease Control and Prevention.

And even if you haven't spotted a tick or a rash on your child, but notice uncharacteristic symptoms in your child, then it’s time to head to your healthcare provider. Not only is Lyme disease one of those things that has a better recovery rate if it’s caught soon, but your child might be dealing with something unrelated to a tick bite that is worth checking out.

Because it's always better to trust your mom instincts when it comes to the health of your child, right?