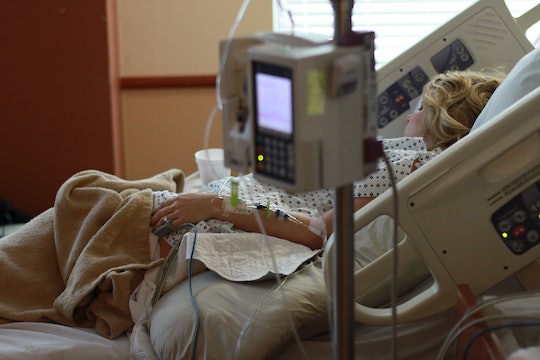 Here's How A Cervical Cerclage Affects Your Baby

Besides being a tongue twister, a cervical cerclage is a pretty common term within the field of obstetrics, despite how terrifying it sounds. But what exactly is a cervical cerclage? If you’ve been told you need one, you’re probably wondering, "how does a cervical cerclage affect my baby?" According to Dr. Miao Crystal Yu, an OB-GYN at Saddleback Memorial Medical Center in Laguna Hills, California, pregnant women will typically need one done if they are at risk for a preterm delivery. Unless it’s an emergency, a cervical cerclage is generally placed in the second trimester of pregnancy.

Yu explains to Romper in an email that a cervical cerclage procedure is "a stitch that is placed in the cervix for women who are currently pregnant and at risk for preterm delivery, and by 'stitching' the cervix closed, the hope is that it will not prematurely dilate, thus preventing an early delivery."

Dr. Deepti Siddaramappa, a gynecologist at Health City Cayman Islands, tells Romper that a cervical cerclage is typically necessary if you have cervical insufficiency, and the procedure is used to "reinforce the cervix."

What would make your cervix insufficient? According to Dr. Fares Diarbakerli, an OB-GYN in northern New Jersey, an incompetent or insufficient cervix is when there’s "weakness in the cervix, and in the second trimester, the cervix dilates without pain or contraction."

According to Siddaramappa, "By mechanically increasing the strength of the cervix, the occurrence of [serious complications] associated with cervical insufficiency may be reduced. A weakened cervix or cervical insufficiency is when the cervical canal opens up prematurely before labor, and [complications] include miscarriage, a prolapse of the fetal membranes into the vagina, premature rupturing of the fetal membranes, preterm labor and delivery, and fetal loss."

Don’t worry, if you think you might need to have a cervical cerclage, Yu says the procedure is not painful and it’s almost always done in an operating room. Diarbakerli says it's done under spinal anesthesia, is not painful, and you’ll be going home within one or two hours.

And as far as the safety of your baby is concerned, Yu says, "A cervical cerclage is generally placed in the second trimester, so it is not associated with birth defects or developmental delays." Siddaramappa agrees, noting that the cerclage itself does not affect the baby, but that there are some complications that could occur during the procedure. Complication risks include the inability of the cervix to dilate normally during labor, cervical infections, premature contractions, rupture of membranes, and vomiting and nausea from the side effects of the anesthesia, according to the American Pregnancy Association.

Diarbakerli says, "Depending on the severity and the stage, you can rupture the membrane, and there's an increased risk of infections if done too late." It seems more complications occur in women who are already having advanced cervical dilation, however, and are in need of an emergency cervical cerclage.

Other than keeping the baby in the womb to bake longer, and barring complications, a cervical cerclage will have no effects on your baby and your baby won't feel a thing. Be sure to talk to your doctor about any concerns you may have about the complications that could occur for you during this procedure, and stay in contact with them after so they can monitor your healing.