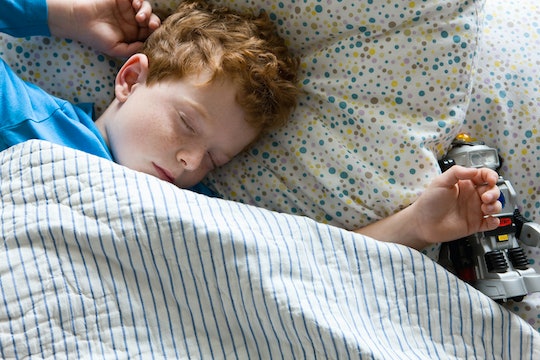 There are few words that can strike fear into a parent's heart quicker than daylight saving time. I mean, you know how tough it is for your adult body to handle falling back an hour and springing forward an hour, but how does daylight saving time affect kids? (Other than making them miserable.)

In general, daylight saving time affects your kids in the same way it affects you. It makes them groggy, sleep-deprived, and crabby. But exhaustion is a much harder thing to tackle for little ones than it is for us. (And you know how much you hate being sleep-deprived.) In the fall, when we go back an hour and daylight saving time officially ends, child psychiatrist Sean Paul tells Romper, "What happens during the fall time change is that young children will be going to sleep and waking earlier. For example, a child who is sleeping from 7 p.m. to 6 a.m. will now be on a 6 p.m. to 5 a.m. schedule. This is disruptive in many ways as the earlier bedtime may run into dinner time, and the early waking may not be the best time for the parents to wake up." You said it, Paul.

I know. It's just one hour, but you find yourself crying in frustration that your kid can routinely skip their three-hour nap and live to tell the tale, but one hour off schedule makes the entire family miserable. It sounds super panicky, but there's also the chance your child will be totally fine. Wayne Ross, senior researcher in sleep and sleep disorder studies at Inside Bedroom, tells Romper that children have a varying range of sleep needs, and the ending of DST may not necessarily affect all of them very much, or in the same way.

But he understands that any kind of clock changing can mess with young kids, so for your early birds, they might wake up earlier in the morning than usual as the clock shifts. This, as you well know, makes them overtired as they inch closer to bedtime.

"Similar to jet lag, a time change of a mere hour of difference in time zones can have an effect on a baby’s or kid’s circadian rhythm, and cause physical, mental, and behavioral changes that generally follow a 24-hour cycle. This can impact the sleep schedule for a few days and begin to slack off gradually. In addition, waking up early can result in daytime naps, overtiring, and overall, challenges for the doting parents," Ross says. "However, the switch to or from DST does not last longer than a week or two at most, and babies and kids resume a sleep routine naturally.

According to the National Institute of General Medical Sciences, your circadian rhythm is super important in developing a healthy sleep pattern. Your body's master "clock", the suprachiasmatic nucleus (SCN), controls the production of melatonin, which is the hormone that makes you sleepy. This SCN is also located just above your optic nerves in your hypothalamus, and relays information from the eyes to the brain. So when your little one is not seeing light anymore at 6 p.m., their SCN is producing melatonin, messing up their entire rhythm as they believe it's now bedtime, even though there's still an hour to go.

Pretty heavy stuff, right? And you just thought your kid was being a jerk. But it turns out their little bodies can't quite handle the full hour change as easily as we'd like. You can't do much about the time change, but you can try and make it easier on your little one with these five tips. And if that fails, make some coffee. (In fact, you should always be making the coffee, especially at the end of DST.)