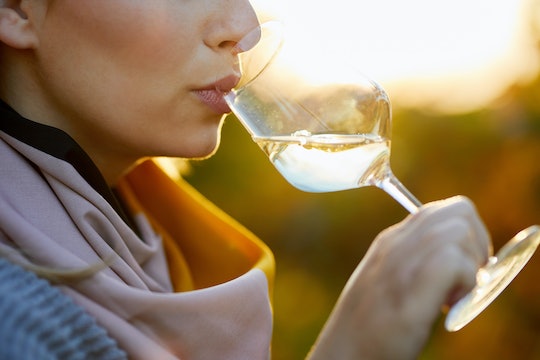 Speaking from experience, I know I drank a lot of wine when I was trying to conceive (TTC), especially on those stretches when we had to have marathon sex and I needed to “get in the mood.” You can only feel seductive and make it fun so many times before you kinda want to get it over with — especially if it’s day five in a row. But I wonder if my partner and I drinking wine had anything to do with how long it took for us to conceive. How does drinking affect ovulation? Does it only matter if you drink heavily, or are social drinkers going to have a rough time, too?

According to Dr. David Diaz, a Reproductive Endocrinologist at MemorialCare Orange Coast Medical Center in Fountain Valley, California, drinking alcohol does indeed affect ovulation, but perhaps not in the way you might initially think. “Alcohol contains ‘empty calories,’ which helps pack on the pounds leading to obesity,” Diaz explains to Romper. “In turn, obesity is one of the leading causes of metabolic problems and often plays a role in ovulation. It is estimated that 50 percent of the social drinkers who consumed more than three drinks per day and 60 percent of the heavy drinkers had significant derangements of menstrual cycle and reproductive hormone function. The major abnormality found in social drinkers was anovulatory cycles, and three of the five women who were heavy drinkers had persistent rise in prolactin levels.”

If you’re trying to conceive, can you drink sometimes, or is it only with heavy drinking, whether social or not? Diaz says, “Excessive alcohol, like excessive eating, can lead to many undesirable physical ailments like diabetes, insulin resistance, and liver toxicity. Moderation is the key to excessive eating and alcohol consumption. Women are classified as heavy, social, or occasional alcohol users on the basis of the actual number of drinks consumed during three consecutive weeks of alcohol availability.” Diaz sites the study, Chronic Alcohol Effects On Anterior Pituitary And Ovarian Hormones in Healthy Women, and explains that the study categorized heavy drinkers as drinking an average of around seven drinks a day, while social drinkers had an average of almost four drinks a day, and occasional drinkers had around one drink per day.

Wondering what kind of drinker you are and if you should cut back? Diaz says to use the “CAGE” questionnaire, which is an acronym referring to the four questions you should ask yourself:

“And if you have two 'yes' answers, it could suggest the possibility of alcoholism should be explored further,” Diaz says.

However, this cutting back on drinking to conceive doesn’t all fall on just the woman. Well, as far as how it affects ovulation specifically, it obviously does. But as far as alcohol affecting fertility, Diaz says it can affect men, too. “In both women and men, the reproductive systems are regulated by the same stimulating hormones released by the pituitary gland — only the target organ differs,” he explains. “Most men are able to consume greater amounts of alcohol without manifesting drunkenness as quickly as women. However, chronic exposure can lead to harmful effects, not only in sperm production, but also toxicity of the liver, intestinal tract, the brain, and an increase in cancer.”

Now I’m not trying to be Carrie Nation over here, but it seems like it’s pretty important to moderate your drinking when TTC. Not because it will affect the potential baby’s health necessarily, but for your own health. Being the healthiest you that you can be is a great first step in successfully TTC. Now I know those stories of one drunken night creating a happy accident, but every “body” is different. Talk to your doctor and your gynecologist about your drinking habits if you’re TTC, and especially if you’re afraid you may have a problem. They shouldn’t judge you, and will help you get the guidance you need.

More Like This
The Difference Between The PICU & The NICU
Baby-Led Weaning: A Comprehensive Guide To Introducing Solids
What Does Amniotic Fluid Smell Like? A Nurse Explains
Here's How To Keep Your C-Section Incision Dry