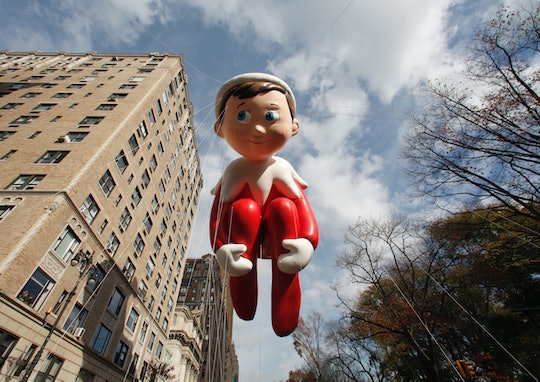 So you've got your first Elf on the Shelf. Congratulations, you've just signed on for a month of brainstorming "clever elf pranks" every night before bed, with your husband offering incredibly creative suggestions like, "just put it in the fridge again". But never mind the pranks. First things first: how does your Elf on the Shelf arrive?

You may be thinking, "What do you mean, arrive? It arrived in an Amazon box. Along with more tampons and Tide." Yes, I know that. What I mean is, have you thought out Tingles' first big appearance? How is he going to "arrive" in the home?

I actually wasn't aware, but apparently some folks make quite a thing out of their elf's yearly return. An article in Huffington Post quoted one parent as saying their elf arrives: "with a goody bag containing a passport, sleigh license, letter from Santa, Santa letter writing set, activity book, and a small bag of sweets." Now that is a very organized and together elf. (No word on whether Snowball also brings his insurance card. Though, considering the antics he gets up to, he really should. The American healthcare system would cripple him financially.)

Other parents share that their elf makes his first appearance bearing an advent calendar, or seated at a special holiday breakfast for just the elf and the kiddos. Huffington Post actually offers a whole list of ideas for an elf's first day on the job. As expected, some are elaborate displays that make me feel like a failure as a mother, while others are more low key, and seem doable - like spelling out: "I'm back" in M&Ms. My personal fave is an elf soaking in loads of mini marshmallows in the bathroom sink. Though knowing our household, we would get distracted and forget to clean this up, which would lead to a month of my son sitting and eating mini-marshmallows every time he used the toilet.

Another idea that I find quite cute is putting up a tiny door just for your elf. Like everything else in human existence, you can buy one on Amazon. Though really, I don't think it would be that hard to make one. And then after all of your careful crafting, you may watch your child yank it off the wall and ask you to explain why it doesn't show a portal into the North Pole and is just a blank wall, and are you a liar and is magic actually dead?

On that note, I also wasn't aware of the many rules surrounding Elf on the Shelf. Like, I didn't realize that if you touch your elf and it loses its magic, this is a serious problem. And there are a variety of emergency methods one may employ to try to bring its magic back. Per the official Elf on the Shelf guidelines, you can try:

I must admit, all of this sends my mind into a dark tableau of a panicked family gathered around a magic-less Twinkle lying in a sad heap of cinnamon... everyone nervously clasping hands and singing "Jingle Bells" like a funeral dirge — hoping, praying for a return to magic.

Anyway, how the elf arrives is totally up to you. It can arrive in a glorious explosion of marshmallow splendor, with "Magic" by The Cars blasting from nearby speakers, or it can be posed quietly in the corner atop a copy of 1984 — a subtle reminder that both Big Brother and McTingles are watching.

As for when your elf should arrive — well that is also totally up to you. Some parents prefer to torture themselves for the entire month of December, while others might not make Cribbins appear until Dec. 24, citing passport issues. I actually know a mom who wrapped her elf's leg in toilet paper and explained that, due to an unfortunate ACL injury, Topper would be unable to perform any pranks this holiday season. I'm not sure if this makes her cruel, or a mad genius.