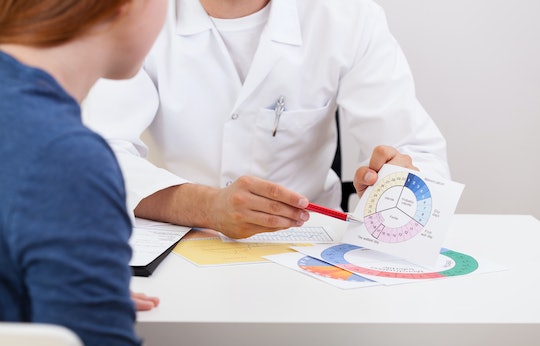 How Does Having Irregular Periods Affect Getting Pregnant?

Before I became pregnant with my daughter, I decided to learn everything I could about the process. High school sex ed had led me to believe that simply looking at a penis meant I would be a mother in nine months, but getting pregnant is a tiny bit more complicated than that. It's really all about making sure the sperm is there when you're ovulating, but not everyone knows when that's happening. Especially if you don't have a stereotypical 28-day cycle. So how does having irregular periods affect getting pregnant? Does it make it more difficult?

Well, kind of. According to What to Expect, getting pregnant means timing conception by having sex before, during, and immediately after you expect to ovulate. When you have a regular period, you can determine when you ovulate and use that time to try and get pregnant. But as the American Pregnancy Association notes, trying to track ovulation when your periods are all over the place can be difficult.

However, in some cases, an irregular cycle may mean ovulation isn't occurring at all. A cycle that is between 21 and 35 days is still considered normal and all signs point to ovulation happening, but shorter cycles could mean you're experiencing an anovulatory cycle and longer cycles (more than 35 days) can mean you are ovulating, but not in a regular manner, making conception difficult.

For the most part, an irregular period doesn't warrant much concern. In some cases, if your irregular period also means you're not ovulating, a doctor may prescribe you fertility drugs or treatments to make it possible for you to conceive. But if your period is simply irregular and you are trying to time conception, here are three ways to know if your body is ovulating.

More Like This
How To Tell Your In-Laws You’re Pregnant
30 Marvelous Baby Boy Names That Start With “M”
Banana Boat Sunscreen Has Recalled Products That Were Found To Contain Benzene
New York Can End Religious Exemptions to Vaccine Mandates, Says A Federal Appeals Court