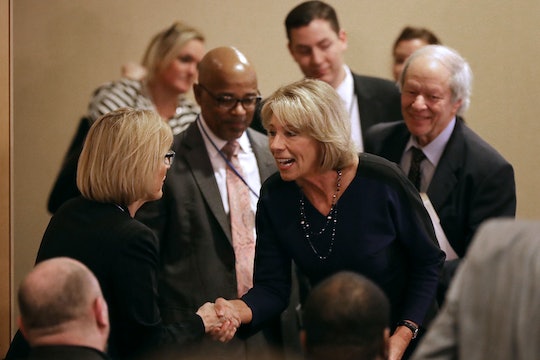 It's still a wonder how Betsy DeVos — the Michigan billionaire and outspoken proponent of school choice and school voucher programs — became the U.S. secretary of Education with exactly zero classroom experience... and yet, here we are. And what's the first major piece of education legislation under her tenure? The "Choices in Education Act of 2017" — known on the Hill as H.R. 610 — and it's a straight up travesty for American public school education. The bill would impact a number of facets within the American education system, but how does H.R. 610 affected special education? Turns out, a lot.

Besides gutting nutritional standards for the national school lunch program, H.R. 610 seeks to repeal the Elementary and Secondary Education Act of 1965, which would significantly restrict federal funding provided to public schools by the U.S. Department of Education as well as limit the department's overall functions. But if this foundational legislation of American public schools is repealed, that means equal opportunity protections for students would also be eliminated, including special education resources for students with special needs, including IEPs.

In sum, DeVos's school choice bill is just bad legislation overall — but when you really take a close look at it, you can see just how many different areas of education will be impacted, including special education.

The Elementary and Secondary Education Act of 1965 has been reauthorized by Congress every five years. During the Bush era, it was renamed as the No Child Left Behind Act. Under Obama, it became the Every Student Succeeds Act. No matter the name, it afforded the necessary protections that special education students have come to expect as standard in American public education, specifically ensuring schools that receive federal funding must provide support for students with disabilities. ESEA also provided dedicated grants for special education centers.

There are private schools that focus solely on teaching students with special needs, essentially offering only special education services — and H.R. 610's school voucher system would benefit families who choose to send their students to these specific private schools with vouchers. Unfortunately, there just aren't enough of these specialized schools to serve the rising number of students who need special education in America — which means the bulk of special ed students will ultimately end up being hurt by H.R. 610 if it passes.

So, what's a concerned parent or caregiver of a child who needs special education to do? Make sure that H.R. 610 doesn't pass — and the only way to do that is to call your legislators and tell them to oppose H.R. 610. Give them a lesson in education they — and America's schoolchildren — can't afford to miss.