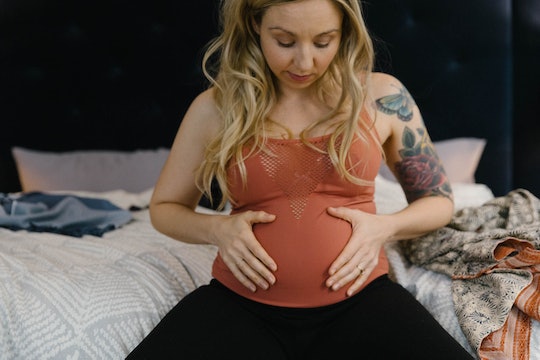 Near the end of a pregnancy, all moms-to-be are wondering the same damn thing: when is "it" going to happen? While every woman and every body is different, and due dates are nothing more than educated guesses, there are some key indicators that might reveal just when "go time" will be. Still, experts agree that it's difficult to know exactly how and when a pregnant woman will go into labor. So, how does labor start naturally? And, perhaps even more importantly, how can you tell when you're actually in labor?

A 2015 study published in BJOG revealed that measuring cervical length with a transvaginal ultrasound may not tell, with 100 percent accuracy, the exact moment a woman will go into labor, but it can predict when, approximately, labor will start "naturally." For example, if a woman's cervical measurements are more than 30 millimeters when she's nearing her due date, doctors predict a less than 50 percent chance that the soon-to-be mother will deliver within a week. On the other hand, if cervical length is at 10 millimeters or less, there's an 85 percent chance that labor will begin within a week. So what does this mean? The pregnant body, as it readies itself for labor and delivery, does make detectible changes that are a precursor to childbirth.

In terms of labor starting on its own and without medical intervention, researchers at The University of Texas Medical Branch have pinpointed cell markers that happen when labor begins. As stated in another study published in PLOS, there are specific changes to our DNA (referred to as telomeres) that are present in amniotic fluid as pregnancy tissues get older. Those cells could be telling your baby it's time to enter the world. Lead author of the study, Ramkumar Menon, Ph.D., an assistant professor in the department of Obstetrics and Gynecology, and co-author of the same study George R. Saade, M.D., a professor and chief of Obstetrics and Maternal Fetal Medicine, tells Fit Pregnancy that DNA from the potential baby travels into the mother's blood frequently during pregnancy, saying, "So we assumed that if the baby is to send a signal to the mother that it is in trouble and needs to come out, the telomeres would be good candidates."

The American College of Obstetricians and Gynecologists (ACOG) describes a typical gestation period one that lasts between 37-42 weeks, adding that one-third of women don't give birth within 10 days of their due date. Tommy's, an accredited midwife-led pregnancy information site, says a common sign labor is about to begin is the onset of Braxton Hicks contractions — also known as false contractions. These sporadic contractions are how a pregnant person's body prepares for the real deal.

Likewise, as your cervix begins to prepare by stretching, you could lose your mucus plug; another sign that your body is preparing for labor. This usually occurs after 37 weeks gestation, and as Dr. Maureen Whelihan, MD, an OB-GYN at the Center for Sexual Health & Education in Greenacres, Florida, tells The Bump, "Losing your mucus plug generally implies a change in the cervical opening size, either via dilation (widening) or effacement (softening and becoming thinner).” But because of how differently every woman's body reacts, it could still be days — even weeks — until you go into full-blown labor after you lose your mucus plug. But remember: you can't begin the dilation phase until the mucus plug falls out, so it is a sign of things to come.

In the end, labor is often as unpredictable as pregnancy itself. Scientists continues to research telomeres and how hormones and oxytocin are involved in preparing a woman's body for labor and delivery, but there's no definitive "this is it" clue that every woman can use to really nail down a due date. In the end, trust your body and if you're unsure and/or concerned about your upcoming labor and delivery experience, talk to your OB-GYN, midwife, and/or other health care provider. After all, that's what they're there for.