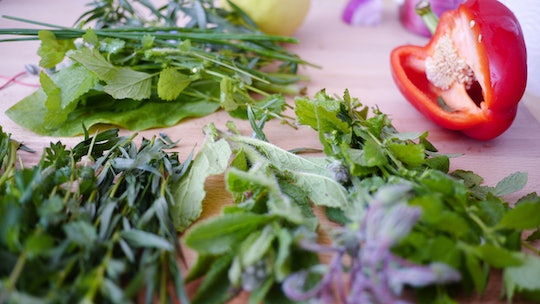 How Does Listeria Cause Miscarriage? Vegetable Recalls Mean Pregnant Women Are At Risk

In wake of the recent recalls due to Listeria monocytogenes scares, the alarming health risks associated with listeria continues to be a necessary conversation. Food manufacturers, CRF Food Products and Ghiringhelli Speciality Foods, and some of its associated stores, like Trader Joe's, Costco, and Walmart, have recalled a number of food products for potential contamination with the detrimental bacterium, Listeria monocytogenes, which causes listeria. Listeria affects pregnant women at higher rates, causing miscarriages and other serious risks. Here's a breakdown of how listeria causes miscarriages.

Listeria is a serious infection that cause bacteremia, meningitis, death, miscarriages, and stillbirths. According to the CDC, pregnant women are 10 times more likely than the general public to get infected with listeria. It also primarily affects older adults, adults with weakened immune systems, and newborns.

In 2011, an outbreak of cantaloupes contaminated with listeria caused a number of deaths and illnesses. According to the CDC, 33 deaths associated with the listeria outbreak in cantaloupes were reported in 2011. One Iowa woman reportedly had a miscarriage due the same outbreak that year.

Listeria is a rare food-borne illness that can grow at refrigerator temperatures that other food-borne illnesses cannot, the FDA report noted. The symptoms include, fever, chills, diarrhea, muscle aches, and stiff neck, among others. They can occur at different times — a few days after the infection, or a few weeks. Given the varying symptoms, the FDA recommends that pregnant women focus on prevention.

Here is a list of foods both the FDA and CDC recommend that pregnant women avoid to prevent listeria:

Raw or undercooked fish or seafood, such as sushi or sashimi

Refrigerated smoked seafood, unless it has been heated until steaming hot

According to CDC research, pregnant Hispanic women are 24 more times likely than the general population to be exposed to and infected with listeria. It is certainly important for everyone, particularly pregnant women, to remain informed of its health risks and best prevention practices. Read more information on listeria and prevention tips at the FDA's website.