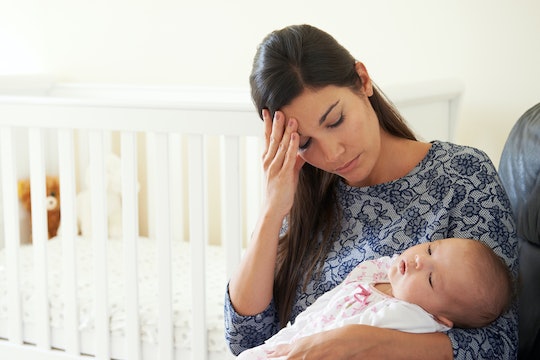 How Does Postpartum Depression Affect Breastfeeding?

It makes sense that there would be a connection. According to Postpartum Progress, some of the symptoms of postpartum depression, or PPD, include feeling overwhelmed to the point of wondering if you should have ever become a mother, feeling guilty because you think you should be handling the changes better, and feeling very sad and hopeless. And all of those symptoms? They can be exacerbated by breastfeeding issues. Imagine a mom with PPD also struggling with a low milk supply. No matter how much she knows that a fed baby is best, when she's faced with difficulties that stop her from doing what she wanted to do, what she thought was best for her baby, it's easy to feel hopeless.

But are the breastfeeding issues caused by postpartum depression? Possibly. According to Postpartum Progress, a mother's mood and lactation are both affected by the same hormonal shifts in her body. Postpartum depression is triggered by all of the hormonal changes happening after a woman gives birth, but so is breastfeeding and some of those same brain chemicals responsible for a mother's mental wellness are responsible for producing breast milk.

Postpartum Progress noted that the correlation between PPD and breastfeeding goes both ways. Because progesterone and estrogen are necessary for chemical balance in the brain, when they drop in order to produce milk, a mother can feel the affects of sadness and depression. (If it only lasts a couple of weeks or so, doctors call it the "baby blues" as your hormones get back in order.)

But some aspects of breastfeeding are definitely affected by postpartum depression. Oxytocin, the hormone responsible for the let-down of breast milk, is lower in women suffering from PPD according to Fit Pregnancy. Although breastfeeding does help a mother feel bonded to her baby by releasing oxytocin, Fit Pregnancy noted that some studies found that mothers suffering from PPD actually felt worse after being given manufactured oxytocin.

According to Postpartum Progress, not only does the issue with a milk let-down affect a woman suffering from PPD, but she also has a difficult time bonding with her baby, making her depression even more debilitating.

Another hormone affected by PPD that influences breastfeeding — prolactin. Research published in the Journal of Women's Health found that prolactin stimulates milk production, but that it is also one of the central hormones responsible for maternal behavior. When it's lowered in women who have PPD, their milk production can suffer. The research also noted that stress and anxiety can affect the prolactin levels, so as a woman becomes more worried about her milk production, her supply takes an even larger hit, as well as her mental well-being.

In fact, that study concluded that failed breastfeeding and PPD were common clinical problems that frequently occurred together.

Although it's obvious that postpartum depression can affect breastfeeding, it's also easy to see that breastfeeding could affect postpartum depression. It feels a little bit like "which came first, the chicken or the egg." As you try to breastfeed, you may not feel connected to your baby, which makes you want to give up breastfeeding. You then feel guilty, so you continue to try, but the hormonal shifts make it difficult and you find yourself even more anxious, worried, and frustrated. Moms who want to take medication for PPD for breastfeeding and moms who want to nurse, no matter what, may refuse all medication for fear it will affect their breastfeeding journey even more.

It's a cycle. Research published in Pediatrics found that women who were suffering from postpartum depression had an increased risk of a negative breastfeeding experience, including decreased breastfeeding duration, increased difficulties while nursing, and a mother's confidence in breastfeeding.