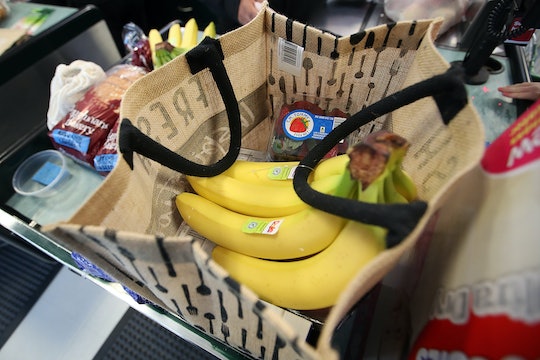 If You Receive Food Stamps, Here's How The Shutdown Affects Your Benefits

This government shutdown is the longest in the nation’s history, and as it looms on and on with no end in sight, people are worried. With Trump saying he’s willing to keep the shutdown going “for years” until he receives consensus to pay for a $5.7 billion border wall, nobody knows how and when this horrific ordeal will end. The furloughed employees and those with government benefits have a lot of questions. Furloughed employees wonder when they’ll get paid/work again, and those with government benefits are wondering, among other things, how does the government shutdown affect food stamps?

So far, it’s been somewhat OK, but still alarming. The Huffington Post reported that people from all over the United States noticed that food benefits were distributed early instead of in February “in an attempt to make sure the month’s benefits were paid before the program’s money ran out.” According to Business Insider, the funds are typically dispersed on Feb. 1. However, The Huffington Post article also noted that “The U.S. Department of Agriculture, which administers [the Supplemental Nutrition Assistance Program] SNAP, has not announced a plan for March. Suspending benefits or paying them partially could have catastrophic consequences ― decimating household budgets and even provoking widespread hunger.”

The annual cost for the food benefit domestic program is $65 billion, and it helps 38 million people around the United States have an average of $123 per month for food, noted the Huffington Post article. There doesn’t appear to be a “good” plan as to what to do after February, however, and that’s a pretty horrific thought that 38 million people may go hungry because of this shutdown. The one plan that has been thrown out there by the Trump administration is replacing SNAP benefits with food boxes, which was suggested last year. No word if this is the plan they’ll use going forward as this shutdown continues to loom over our heads.

The Huffington Post also reported that Secretary of Agriculture Sonny Perdue has refused to discuss what would happen in March in a conference call with reporters, and he said, “Congress has enough time to sort out funding and that Democrats ought to give in to Trump’s wall demands.”

Additionally, there is a two billion dollar deficit when it comes to a contingency fund. The Huffington Post reported, “While the USDA has not said what it will do, the agency has said it has $3 billion in a contingency fund that it could use. But the total cost of one month of food benefits is closer to $5 billion."

Folks on government assistance are rightfully worried and trying to make plans about which food pantries to go to if their benefits run out, or shelters they can stay in if they are forced to choose between eating and paying rent. So for now, at least until March, the way SNAP benefits will be affected is that people should have received their deposits early. Hopefully the shutdown will end before we get to the point where the benefits run out, but in the meantime, people are trying to prepare the best they can.