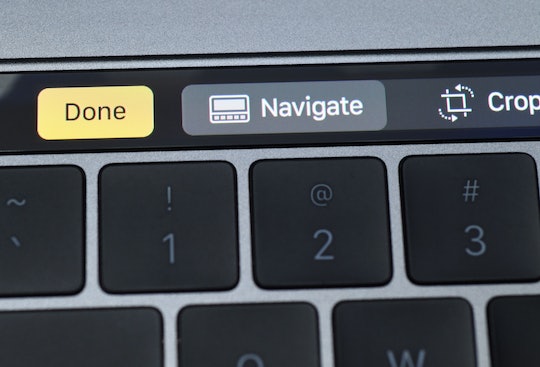 How Does The MacBook Touch Bar Work? The New Design Is User-Friendly

Apple unveiled a redesign of its popular MacBook Pro on Thursday and as with all things Apple, the internet can't quite make up its mind about the change. While Apple fans are excited about the addition of a touch screen option, it isn't exactly what everyone wanted. For users looking to figure out how the MacBook Touch Bar works, they could find it very different from the full screen touch-sensitive option they may have been expecting.

The new "Touch Bar" is an easy-to-navigate screen strip that will pop up to replace the function keys on the MacBook. Apple has replaced the dozen built-in hardware keys with the Tuch Bar option. The new, lighter MacBook Pro (the lightest, thinnest MacBook to come out of Apple yet, with the 13-inch version weighing in at only three pounds) will allow users to control and manage their apps with a touch of their fingertips. The Touch Bar will light up with a full menu of options that will change in real time with whichever app is in use. The interactive Touch Bar also offers the ever popular autofill options and emoji suggestions. The Touch Bar is also easily customizable; If a user wants to add a new tool or app, they simply need to drag and drop new tools to the Touch Bar.

Another nifty feature of the MacBook Touch Bar? Touch ID is now a thing. Touch ID is a fingerprint reader that will help users manage their privacy unless someone steals their fingerprints (don't worry, that won't happen... ). Touch ID is designed to help users make online purchases or switch screens from one user to another while keeping their personal information from being compromised. Which means the days of my sons changing my screen savers to terrifying pictures of shark attacks could well and truly be over, right? Never mind me, though. What does the internet have to say about the new MacBook Pro Touch Bar and Touch ID?

Some Apple fans are skeptical about the new Touch Bar, but the internet is a fickle beast so that could change on a dime. The speed of the new MacBook Pro should win some fans over (an Intel Core i7 processor and a new graphics card has the latest MacBook clocking in at twice the speed of its predecessor), as should the light, sleek design.

So as long as you don't mind the price tag of the MacBook Pro with Touch Bar — $1,799 for the 13-inch model and $2,399 for the 15-inch — you might find yourself singing the praises of the latest MacBook Pro soon enough.