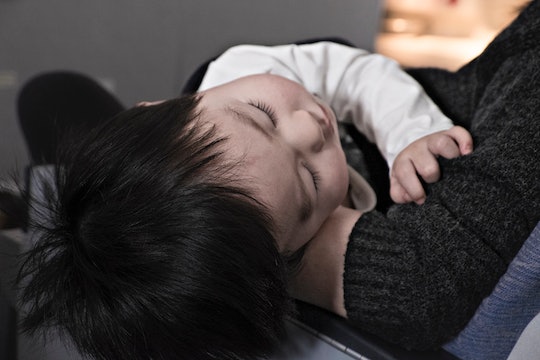 Here's How The Time Change *Really* Affects Your Baby's Sleep, According To Science

The end of Daylight Saving Time (DST) is upon us this weekend, and with it comes the inevitable adjustment period in all of our schedules. I remember relishing the end of DST when I was in high school and college. It was that extra bit of sleep that I loved when I was waiting tables and studying. That all changed when I became a mom and realized that kids don't relish it in quite the same way. If you're new at this mom thing, you're probably wondering, "how does the time change affect your baby's sleep?" Strap in, parents, it's going to be a bumpy ride.

That six month period of time when social time runs afoul of our natural circadian rhythms, terminates in the glorious rolling backwards of the clocks. However, babies don't use alarm clocks and they'll wake up when they darned well please, which will probably be an hour earlier than you'd like them to. This is especially true for babies who likely sleep in controlled sleep environments with dark curtains and cool temperatures. Their body isn't being told to wake any later, so they simply continue to rise as though nothing has changed, and as if you've already had your coffee. Rude, I know.

It wouldn't seem as though an hour would make that big of a deal, but think of all you could be getting done in that hour. You could be enjoying an entire cup of hot coffee without interruption. (No need to microwave it four times.) You could have morning sex — even if you took the time to brush your teeth beforehand. You could shower, shave, have coffee, toast, and read the headlines. I mean, come on, you're a parent — you're already awesome at multitasking. That hour is a precious commodity, and the desire to guard that time is fierce.

The end of DST isn't as awful as the onset of the six month period of time when the time on the clock is misaligned with the natural rhythm of the body, but it's still challenging. According to a study in Current Biology, DST, artificial concept that it is, may be doing more harm than we think. Because our bodies are meant to follow a natural pattern that works with the geophysical lunar calendar — read: when it's light and when it's dark — an artificial shift in that rhythm is highly disruptive. Their study argued that our bodies never truly adjust to the shift, but instead, are forced into an unnatural pattern that disrupts the natural circadian rhythm. When we see its end, we fall into our natural pattern for sleep, and sleep better overall. Which means your baby should be better when DST ends than when it actually begins.

However, just because it's easier doesn't mean there won't be pitfalls during the adjustment period, especially if you are the parent of a young infant who sleeps in a controlled environment that's kept dark and cool. They are likely to continue rising at the same time until adjustments are made in their sleep/wake cycle by shuffling around bed times, meal times, and possibly nap times until they begin to wake later. For older kids, it's a bit easier. I find that if I put my kids to bed a half hour to hour later than usual, I can get them adjusted pretty quickly, even if it's a bit touch-and-go at first.

Remember when you set your clocks back this Saturday night that it's likely you'll be having an early morning, and perhaps the best offense is a good defense with this circumstance. It might be time to consider going to bed a bit earlier yourself so that you're ready to take on your baby's early morning.