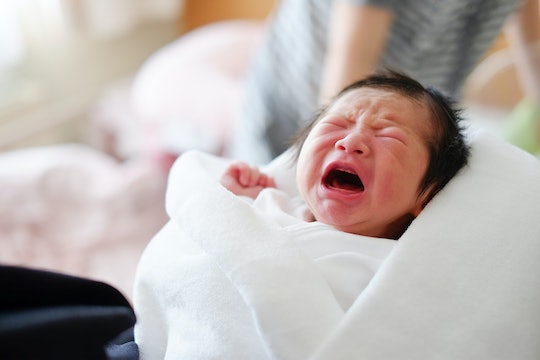 So Your Baby Just KNOWS To Come Out Head First

Despite being the incubator for your baby, most of your pregnancy progresses without any of your control. It's a natural process and, for the most part, follows the "plan." This includes little things that are a major deal, like your baby flipping into the head-first position for delivery. But how does your baby know to be born head first? Is there a light that goes off in your uterus, signaling to your baby that it's time to do a flip? Are they practicing their synchronized swimming moves for the 2032 Olympics and they just got stuck?

When I was in fifth grade, I saw a picture of the human body and it was filled with little people. The idea was to show you what your body was doing, all on its own, and how much work it would be if it were actually done by real people. Someone pumping the blood, someone making your lungs breathe, someone digesting your food — you get the idea. Obviously, there aren't any little people making your body do what it does, but that vision stuck with me for a long time. When I became pregnant, it blew my mind how much my body was accomplishing all on its own. I still like to imagine that there's a crew of women (What? Women get sh*t done.) making my body function like it should, but it turns out that in pregnancy, your baby is actually responsible for a lot things you're expecting to happen as you lead up to delivery, including flipping into the head-down position.

According to The American Congress of Obstetricians and Gynecologists, when your baby comes out head-first, this is called a vertex presentation. A breech presentation is when your baby's butt and/or feet come out first, which happens in three to four percent of all births. If most babies are making the flip to head-first, it stands to reason that it's an instinctive position. But what makes your baby take on that presentation?

Dr. Gary Sykes, an OB-GYN based out of Australia, noted on his website that after about 34 weeks, it's normal for babies to be getting in the head down position and after 36 weeks, there's more concern if your baby is still in the breech position. The reason for the flip? It's easy — your baby knows to get in a head down position simply because there's less room. As your pregnancy advances, there's less room for the baby to move in your uterus, so they look for a more comfortable position. For most babies? That means they put their head down towards your pelvis with their buttocks towards the top of the uterus.

This explains why a breech birth is more common in subsequent pregnancies, according to the American Pregnancy Association. As your uterus stretches from your first pregnancy, a second baby may have more room to move around and be less likely to adopt the vertex presentation.

But don't worry. If your baby hasn't made the flip yet, there's still time. Spinning Babies, a website focused on positioning your baby for an easier birth, noted that there are exercises you can try to get your baby to flip head down as well as medical intervention you can try, including chiropractic care. Try not to panic and just remember, you obviously have a comfy uterus if your baby's just fine hanging out in the same position. Bonus points for being a great hostess. (And you didn't even need Pinterest.)