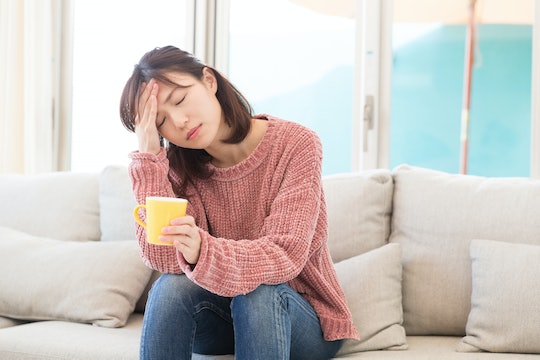 How Early Does Your Morning Sickness *Actually* Start?

Let's face it, morning sickness is a pretty lame name for the all-day, favorite-food-ruining, nausea-and-vomit party of early pregnancy. On the bright side, the saltine parade that is your life means your body is hard at work, baking you a baby. On the downside, the wine and cheese reception your boss is throwing after work might just make your eyes water with the unfairness and misery of it all. So when is it safe to schedule that dinner party / trip to Disneyland / really important meeting? How early does morning sickness start?

According to Parents, and despite what you see on television, you'll probably have a photo of your positive pregnancy test stored on your phone before you feel the tell-tale twinges of yuckiness, because most women feel morning sickness between weeks six and eight. The good news? "You'll probably start to feel better toward the end of your first trimester," explains Katie Krumwiede, MD, of HealthPartners OB-GYNs. Now for the bad news: for some women, the nausea party never stops. Those unlucky few have my sympathies, and surely, the sympathies of any woman who's ever been pregnant, anywhere.

When you're experiencing morning sickness, listen carefully to your body, advises Krumwiede. "This often means more sleep and rest. Normal, everyday tasks may fatigue you sooner and more easily. You may want to take naps throughout the day or go to bed earlier at night." She also explains that while eating and drinking may sound like the very last thing you want to do, keeping up with small, frequent meals can actually reduce the nausea you feel. Don't worry about optimizing your nutrition too much at this point; Krumwiede wants you to eat whatever sounds good, because something is always better than nothing.

Specifically, Krumwiede recommends the B.R.A.T. diet for pregnant women, or bananas, rice, applesauce, and toast — which incidentally are pretty much the only foods I ate in first grade. She also gives a thumbs up to ginger and seasickness wrist bands. Acidic beverages like coffee get a thumbs down, at least until you feel better.

Can you feel morning sickness at week five or even four? It's early, but yes — and earlier is highly unlikely. According to Bumpology: The Myth-Busting Book For Curious Parents To Be by author Linda Geddes, a whopping 80 percent of women experience some degree of nausea, and sickness can rear its ugly head anytime between weeks four and 10.

"Each woman experiences a different degree of morning sickness," explains Krumwiede. "You may have a general uneasy feeling that makes it difficult to eat or drink throughout the day, or you might vomit." She goes on to explain that a few women will suffer form very severe sickness. If you can't eat or drink without throwing up, call you doctor to check for dehydration and malnourishment. Some women will need a prescription to get through it. One thing you shouldn't do? Treat with marijuana, which has shown links to behavior and learning problems down the line. HealthPartners OB-GYN Adrienne Richardson, MD, has this to say:

"If you are suffering from morning sickness, it can be tempting to try just about anything to get rid of the nausea. But the fact is, using any amount of marijuana can be bad for your baby. That’s true during pregnancy. And it’s true after your child is born, too."

Basically, you should plan for morning sickness to begin between weeks six and eight of your pregnancy — but don't be surprised if it shows up earlier, or later than that. Morning sickness is a fickle beast with a very silly name. While you wait for it, stock up on ginger, stomach-settling snacks, and gummy prenatal vitamins. If you're like 80 percent of women out there, you're going to need them.