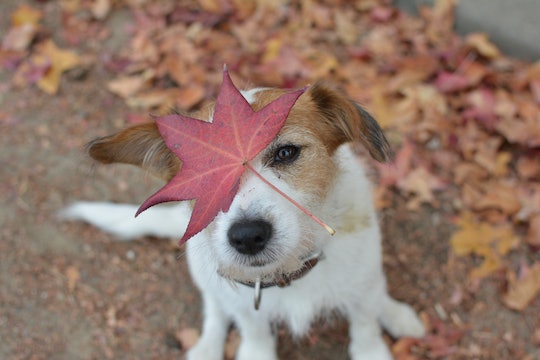 If Your Dog Seems Different During Fall Equinox, There's Actually A Reason For It

Sometimes I feel like my beagles are smarter and more aware than almost any person. In fact, I think that about most dogs and animals in general. (Sorry humans.) And while I know many feel like it’s an old wives' tale, I swear my dogs act differently when there’s a full moon coming. They act nuttier (than usual) and go berserk, zooming all over the house. They also seem to be pretty in tune with the weather and seasonal changes. With the fall equinox approaching, I was wondering how the fall equinox affects your dog, because I'm wondering if my dogs would act any different or more ding dong-ish (that’s totally a word) than usual. Is there anything more than them still waking me up at an ungodly hour to be let out and fed, made even more ungodly by the fact it’s now an hour earlier thanks to daylight saving time? (Which I know isn’t happening on the actual day of the equinox, but a few days later.)

If you’re not aware of the phenomenon that is the fall equinox, it’s happening on Saturday, Sept. 22, and marks the first day of fall in the Northern Hemisphere because it’s when “the sun crosses the Earth's equator at the time of the equinox, from the Northern Hemisphere into the Southern Hemisphere” and there are equal parts of both daylight and night across the world, according to the Weather Channel. Pretty cool and miraculous stuff. Isn’t nature amazing?

So am I a crazy dog lady? Perhaps. But I asked Russell Hartstein, a Los Angeles-based certified dog and cat behaviorist and trainer if the fall equinox affects your dog, secretly hoping I’m really not the crazy dog lady who imagines things about her pups. And it turns out, I’m not super wacky. “Dogs are affected by light cycles more than the position of the sun in the sky. Being crepuscular animals (most active during dusk and dawn), the times of a dog’s increased activities somewhat fluctuate with the amount of daylight,” he explains in an email interview with Romper. So that makes sense why they seem so much more active even at 5 a.m. once the equinox has occurred.

What about the weather and other things like the full moon? Is that in my head, too? Turns out, I’m not crazy there either. “Dogs are affected by storms. It is believed that they can detect barometric pressure changes, and even more subtle rumbles and changes before various natural disasters,” Hartstein says. “A dog’s senses are different than ours and in many cases are much more sensitive and powerful. For example, a dog’s sense of smell is the primary way they navigate and experience life. That super olfactory ability is believed to contribute to their early warning systems of storms and other subtle changes that people cannot.”

And as far as the full moon, it may not be in my imagination that they’re acting like ding dongs even more than usual. “Being animals that are comprised of mostly water (humans and dogs) it makes sense that a full moon and moon cycles affect a dog’s mood and behavior as much as it affects a person," Hartstein adds.

So dogs really are just like us — and even more in-tune and smarter about things like seasonal shifts, weather changes, and moon phases. Sorry you won’t get to enjoy the extra hour of sleep that happens with daylight saving time, but maybe take advantage of that extra amount of daylight hours you’ll be getting on the 22 and take your furbabies on a nice walk to tire them out. Maybe then they won’t wake you up so early.

More Like This
What To Say To A Veteran On Memorial Day
12 Last-Minute Vacation Spots For Memorial Day
It's Not Just Covid: Doctors On Why Everyone's Getting Sick Right Now
Here’s What You Need To Know About That Viral 1960s Baby Formula “Recipe”