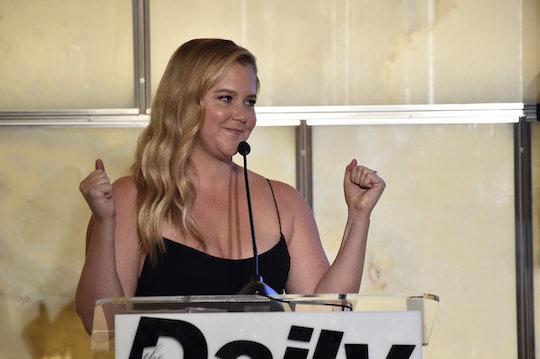 How Far Along Is Amy Schumer? Her Baby-To-Be Already Has Activist Experience

Fans are understandably excited about the news that newly Amy Schumer is pregnant with her first child with chef husband Chris Fischer, and naturally they want all of the details. But just how far along is Schumer? After all, the comedian's baby-to-be has already attended a historic event — the Washington, D.C. demonstrations in early October over the confirmation of Supreme Court Justice Brett Kavanaugh, where Schumer was detained while protesting, as People reported.

Pretty adventurous stuff for a first-timer to the maternity world. I was such a nervous Nellie, I was practically afraid to cross the street at the beginning of my first pregnancy. No wonder people love Schumer — she's not just hysterically funny, but adventurous as well.

Many, if not most, moms wait until the end of the first trimester to announce an impending baby, as the risk of miscarriage goes down greatly after around 10 to 12 weeks, as per Baby Center. Assuming Schumer is following that same scenario, that means she'll give birth in spring 2019, which is a beautiful time of year to deliver.

But protesting isn't not all she's been doing. The star's social media shows she's taken boxing lessons and body surfed in recent months, although, of course, it's not entirely clear if those things were done while she was pregnant, since it's still unknown when the big event is actually going to take place.

Schumer has been fending off pregnancy rumors for months, pretty much ever since she married Fischer in a low-key, seemingly last-minute Malibu ceremony (with invites by text — love it), as Us Weekly reported. I don't know why a couple can't just get married and hang for a while, without all the questions every week about starting a family from everyone from your mom to your mail carrier.

Of course, now that Schumer and Fischer are in the family way, with how in love they look, there's no doubt they are ecstatic, and you can already tell they will make fantastic, fun-loving parents. Schumer, who made the announcement that she was pregnant in a pointed way by adding the news to journalist Jessica Yellin's Instagram re: midterm election voting, as Vulture reported, is a political kind of gal. She's cousins with Senate Minority Leader Chuck Schumer and is passionate about progressive politics, as Vanity Fair reported.

In typical Schumer fashion, one of the few comments she's made about being pregnant is a joke. “I look forward to competing with [Meghan] Markle every step of the way,” said the comic, according to People. And like Markle, she sure doesn't seem to be slowing down. Her Instagram account makes clear that she has a packed schedule of tour dates through the end of the year.

It's not uncommon to become a bit more worried during pregnancy, because you get a lot of warnings about small things from the doctor. So that's why I just love that Schumer's been so unafraid during this period of her life to be out and about.

Attending protests and getting yourself detained for something you believe in when you're pregnant is pretty bold, even though the protests that day were very orderly, and Schumer was with friend Emily Ratajkowski from I Feel Pretty, as CNN reported. There's no point in hiding away when you are expecting, waiting for things to sort themselves out...because after a baby, things won't be sorted for quite some time.