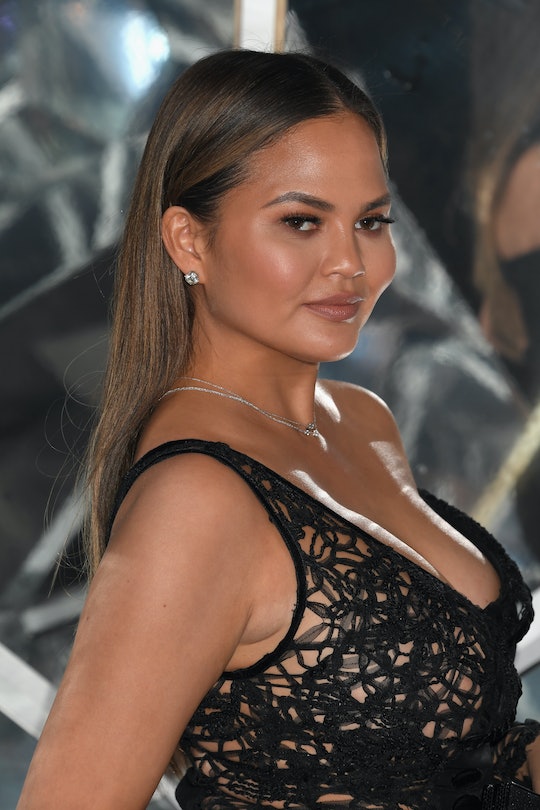 It is absolutely, patently official; 2017 is the year of the baby. Well, the year of the celebrity baby at least. After all of the Kardashian pregnancy rumors have finally simmered down to a dull roar, it seems a Kardashian pal is expecting as well. Announced in the most adorable Instagram post, Chrissy Teigen is pregnant with her second child. Which means little Luna Legend, the 1-year-old daughter of the model/cookbook author and her husband, "Love Me Now" singer John Legend, is going to have to get used to sharing some of the attention in the near future.

But, when can we expect another little Legend to arrive and how far along with Teigen right now? Let's investigate. After years of being very open about her fertility struggles in the past, and in October opened up about her attempts to try a frozen embryo transfer to conceive her second child. Which would mean, if Teigen was being honest about her pregnancy journey with In Style back in October, that she is most likely less than two months pregnant.

But that's just one possibility... you know how it is with these crafty celebrities these days. Teigen did not confirm her due date when she announced her pregnancy on Tuesday via a super adorable Instagram video featuring Luna. In the video, Teigen asks daughter Luna, "What's in here?," apparently pointing to her stomach. Luna, whose voice is so sweet it makes angels cry, I'm pretty sure, answered, "Baby." And just in case fans weren't sure, Teigen captioned the photo, "It's John's!"

While the math does appear to add up that Teigen would be very newly pregnant, it is sort of customary for women to wait until the end of the first trimester before going public with a pregnancy announcement. But it's not like Teigen has ever been one to stand on ceremony.

I mean, fans really should have seen this coming; after all, Teigen did turn down fireball shots on Nov. 17, clearly indicating that she must be pregnant.

But Legend, the wily fox that he is, told People as recently as Friday that the two were "still trying" for baby number two. Come on now, man, I thought I could trust you!

In all fairness, Teigen and Legend have both been talking about trying for a second baby since January, back when Teigen told Entertainment Tonight that their next baby would be a "boy, for sure."

Indeed, a source close to the couple has confirmed with Entertainment Tonight that Teigen and Legend are expecting a baby boy, and that the timing of their big reveal was well thought out:

It’s perfect that they’re sharing the news over Thanksgiving, because they are incredibly grateful to be adding to their family!

For his part, Legend had baby on the brain when he spoke to Cosmopolitan in August. He even opened up about their struggles with IVF:

Having a baby is a big challenge for a couple, and going through that together strengthens your bond because if you make it through [having a child], you know you can make it through anything. We’re lucky that we’re living in an age where we can conceive in other ways. [IVF] brought us Luna and hopefully it will bring us a few more awesome kids, too.

While fans might not know when exactly to expect another baby from Teigen and Legend, they should comfort themselves with the knowledge that another baby is coming. And with that baby, more Teigen, more Legend, more Luna, more Instagram in general, I feel almost sure of it. So take a moment, guys, and just enjoy the good news.