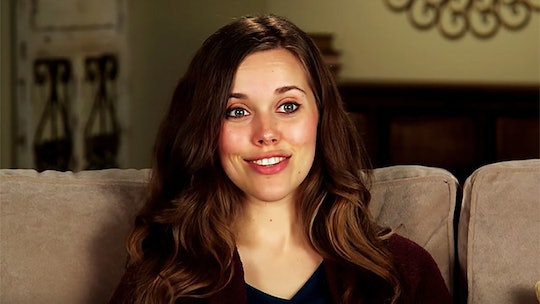 Jessa Duggar's Due Date With Baby No. 3 Is Rapidly Approaching

Back in January, Counting On star Jessa Duggar announced the exciting news that she and her husband Ben Seewald are currently expecting their third child together. It feels like it's been a minute since she shared a pregnancy update, so fans are likely wondering how far along Jessa Duggar is now. Though she has not shared the exact date her bundle of joy is expected to arrive, some sleuthing can help point to anticipated due date.

In early January, Jessa and Ben announced their pregnancy news on Instagram and again on their website. "We are overjoyed that God has blessed us with a baby, due late this Spring!" the couple shared in a statement on their website. "From the day we found out we were expecting, we both guessed boy, and if our predictions are right then we already have a ton the clothing and accessories ready to pass down! At the same time, we would absolutely love it if we found out we were having a girl — though we’ve joked that we’d be starting from square one and might have to learn a few things."

Then on Jan. 30, Jessa shared a sonogram photo on Instagram announcing her pregnancy, with a sweet but simple caption. "We were so happy to finally get to see #BabySeewald3! Looks like this little one will have the same nose as the others," she captioned the photo.

About a month later, on Feb. 21, Jessa shared a touching and heartbreaking post touching on her sister-in-law Lauren Swanson's miscarriage, revealing they were due on the same day.

"Pregnancy — such a precious gift, and definitely not something I take for granted," she began her post on Instagram. "As we look forward to meeting our baby, we’re also feeling an exceptional amount of grief over my brother Josiah and sister-in-law Lauren’s loss of their baby. Lauren and I shared the exact same due date. We have cried so many tears, both together and apart."

But then on April 3, Jessa casually dropped a major hint about her due date in an Instagram photo of her son looking adorable while snuggled in a Snuggle Me lounger. "I am SO excited to put this to use in just 2 short months from now, and wish I would’ve had one around when my other two were babies," she captioned the post.

So with all that said and everything Jessa has shared so far, it sounds like she's due in June — and is roughly seven months along in her pregnancy right now.

In the months leading up to her baby-to-be's delivery, Jessa has been keeping busy with home renovations for a more minimalistic vibe, as People reported. And with three little ones running around the house — Jessa and Ben are already parents to 2-year-old Henry and 3-year-old Spurgeon — a simple and clean style will certainly help keep things in order.

Jessa's due date is quickly approaching, and hopefully she'll share a few more updates before their bundle of joy arrives later this spring.