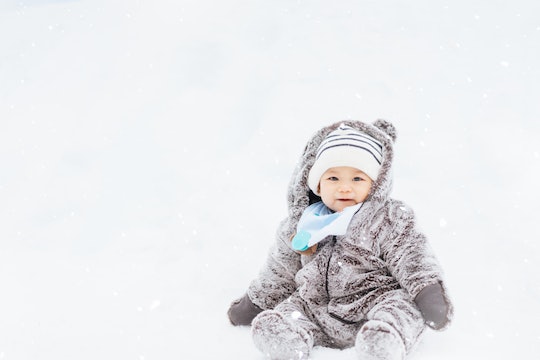 As of this writing, the U.S. is feeling some pretty gnarly cold weather, even down in the south. But nowhere seems to be as cold as the Midwest, where the lows feel like -77 degrees Fahrenheit thanks to the Polar Vortex. I can't even imagine. I mean, do you just freeze into a popsicle when you walk outside? Many folks with small babies in these polar climes are even concerned with how fast a baby can get frostbite. Seriously, those delicate cheeks seem like they wouldn't be able to handle this weather, and even if you’re not in the negative temps, it can definitely affect your health. (Unless you stay in your house for the foreseeable future, that is. Honestly, no one would blame you.)

According to The Associated Press, some parts of the Midwest are experiencing “some of the lowest temperatures in a generation,” with it being “as cold as the Arctic” in some locations. AccuWeather also noted that in these temperatures, frostbite can become a serious threat — “In below-freezing temperatures, ice crystals can form in veins, blocking the flow of blood.” And babies are even more susceptible to this terrifying phenomenon, says Dr. Daniel Ganjian, a pediatrician at Providence Saint John’s Health Center in Santa Monica, California.

Though there’s not an exact measurement of time — a lot of factors go into this, such as how cold the temperatures are in each instance — Ganjian tells Romper, “Babies can get frostbitten much faster than adults … because they cannot shiver to warm up their bodies, they have less glycogen stores — which is a type of sugar that helps support the body’s warming up — and they cannot verbalize how cold they are.” But he notes that there isn't an exact temperature to look out for. "Anything less than 32 degrees Fahrenheit can cause it."

Because it happens so fast, you need to know what to look for. Ganjian says some symptoms before frostbite occurs include bright red cheeks, bluish hands and toes, or pale ears, nose, and chin. Ever wondered about that blue tinge? He says it's called “cold acrocyanosis, which is a coping mechanism of the body to keep itself warm." So if you see those signs in your baby, time is of the essence to get them back inside where it's warm.

Ganjian also says to keep a close eye specifically on your baby’s chin, cheeks, nose, fingers, and toes for frostbite, as those are the places where frostbite typically occurs. “The area becomes pale and numb since blood is moving out of the area. It also becomes hard and waxy feeling. This is a sign of tissue destruction," he explains. Once you notice it, your first instinct may be to rewarm the areas immediately and as quickly as possible with hot temperatures from a stove or very hot water, but Ganjian says that could cause worse damage.

“Rather, the goal is to rewarm with warm but not hot temperatures, such as body warming (like putting your child's fingers in your armpit to warm up) or warm water. Make sure that if you do use warm water on your child that you keep your child warm until the water dries to prevent refreezing, which is very dangerous.” He also says you should speak to your doctor first before anything else.

While there is no exact measurement of time for how fast a baby can get frostbite, there are signs to look out for that occur before the frostbite is actually happening. Look for bright red cheeks, blue fingers and toes, and pale ears, nose, and chin. If you see these signs, it’s imperative you get your baby into a warm environment as soon as possible. Stay safe, and if you do have to go out in the cold, please bundle yourself and your baby up.