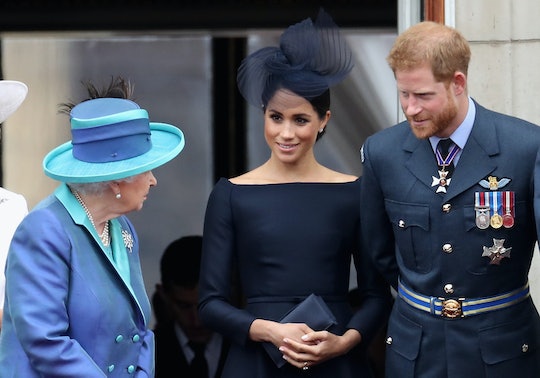 Some Of The Royal Family Rules Have Evolved Over The Years

Even before the American Meghan Markle, Duchess of Sussex became part of the royal family, people all over the world were interested in the dynamic of the British royals and their family life. But people are also fascinated by the many rules they have to abide by, both privately and in public. So how have the royal family rules changed in the past 100 years, from before Queen Elizabeth II was born, until now? ABC will air The Story of the Royals documentary in two parts on August 22 and 23 at 9 p.m. ET, and it’s sure to reignite interest in the royal family, especially when it comes to those who are still alive today.

When Meghan and Prince Harry, Duke of Sussex got engaged, it seemed like the beginning of a new era for the royal family. She’s American and had already been divorced once. And even for those who don't know anything about royal customs, those seemed like two strikes against her. But she was welcomed into the family and ready take on an onslaught of new royal customs and rules that will likely be part of her life for the long haul.

Since becoming part of the royal family, Meghan has been introduced to a ton of new rules to abide by as a royal herself. Among them, for example, is that she’s no longer allowed to take selfies with adoring fans. The idea is that people should look at and speak with members of the royal family as opposed to turning their back on them to take selfies together. It makes sense, but I feel like it must also be such a change for the former actress.

All of the rules of etiquette were probably new to Meghan, but they’re customs that anyone who becomes part of the royal family has to get used to. Over the years, however, as much as Royal Family rules have stayed the same, they've also evolved in important ways.

In 2015, the official change in royal succession was put into effect. The new rule states that females in the line of succession will be considered just as eligible for the throne as males before and after. For example, Princess Charlotte is now fourth in line to the throne. And although Prince Louis is a boy, he was born after her and so is now the fifth in line to the throne. Before, he would have been higher in the line of succession.

In 1936, Queen Elizabeth’s uncle, Edward VIII, abdicated the throne in order to marry a divorced American woman. At the time, the royal family and the church had rules against a titled royal marrying someone who was previously married and divorced.

Years later, Queen Elizabeth held onto that rule when she denied her blessing for her sister, Princess Margaret, Countess of Snowdon, to marry divorcé Peter Townsend, lest she give up her place in succession of the throne. Over the years, though, that rule quickly became less important, as Prince Charles and Princess Diana divorced in 1996. And in 2002, even the Church of England came to accept that divorce is a reality and grant second and third marriages to those who wish to have them.

Over the past several decades, most of those who aren’t part of the royal family or aren't familiar with royal customs in general might have assumed that bowing and curtseying are necessary at any given time. But according to Dickie Arbiter, the Queen's former press secretary, bowing for the Queen is no longer necessary at all times. In Arbiter’s memoir, On Duty With the Queen: My Time as a Buckingham Palace Press Secretary, he wrote that in the modern era, it’s no longer required for people to bow or curtsy when in the presence of a member of the royal family.

"The Queen is very relaxed about it, she doesn’t make rules, she understands that some people feel comfortable doing this sort of thing and others don’t," he told The Telegraph. "There is no hard and fast rule, and if you can’t do it or don’t feel comfortable doing it or don’t want to do it, that’s fine. It doesn’t mean you hold the Queen in any less respect and you won’t be sent to the Tower."

There are literally dozens of rules and customs for members of the royal family to follow and remember, but when it’s all said and done, perhaps it's all worth it to be part of the Royal Family.