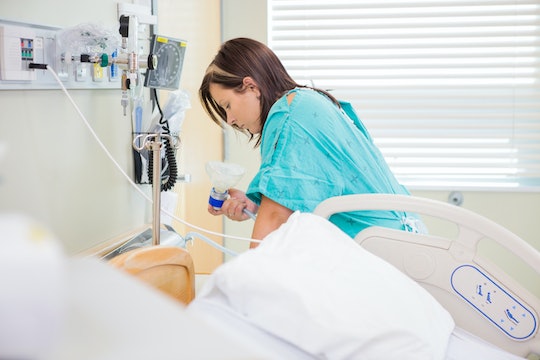 How Having A Traumatic Birth Changes You Long Term

The word traumatic pretty much describes itself. I don't think anybody wants to use it as an adjective for any part of their life, but plenty of moms have had to when talking about their labor and delivery. But knowing how having a traumatic birth affects your body can make the term seem a little less intense. Because, let's be honest, knowledge is power.

According to the Prevention and Treatment of Traumatic Childbirth (PATTCh), 25 to 34 percent of women report that their births were traumatic. Pretty common, right? If an individual, whether it's the mother, partner, or other witness, believes the baby or mother was in serious danger, the birth is considered traumatic. When you think about all of the things that can happen during labor and delivery, that really leaves a lot of room for a traumatic birth to occur. So how does a traumatic birth affect your body?

Deena Blumenfeld, a Lamaze Certified Childbirth Educator (LCCE) and Fellow of the American College of Childbirth Educators (FACCE) from Shining Light Prenatal Education tells Romper that in her nine years of working with pregnant mothers, she's had many mothers who suffered from a traumatic birth under her care. Although they all exhibit different symptoms and different triggers after birth, Blumenfeld sayss that some physical issues after a traumatic birth can happen.

"Traumatic birth, like other major traumatic life events, can have both physical and emotional repercussions. On a physical level, a mother might have ongoing pain or discomfort from a C-section, episiotomy, or other direct physical injury during birth. However, even without such an injury, some mothers have physical issues. "Some of the issues I've seen are low appetite or overeating, chronically tight muscles due to stress, increased period pain or fear surrounding menstruation, and pain during sexual intercourse or other vaginal penetration," Blumenfeld says.

Blumenfeld adds that a mom can suffer from post-traumatic stress disorder, too. "Emotionally, a mothers feelings run the gamut," she says. "She may have nightmares, be unwilling or unable to perform certain tasks, or go certain places. Hospitals or medical personnel themselves might be triggering. She may have depression or anxiety. She may be unwilling to have sex or to have her body touched in certain ways or in certain places." And all of those emotions? They can take a toll on you physically as well.

According to Blumenfeld, any mother who has experienced a traumatic birth should seek help from a licensed professional therapist and/or a support group — talking about your experience and feeling less alone is integral to the healing process. If you've suffered major physical trauma, such as a placental abruption, be sure to talk to your doctors about the next steps in healing and what it means for your body. No two traumatic births are the same, but they can all cause anguish and grief, no matter how physically harmful they were.