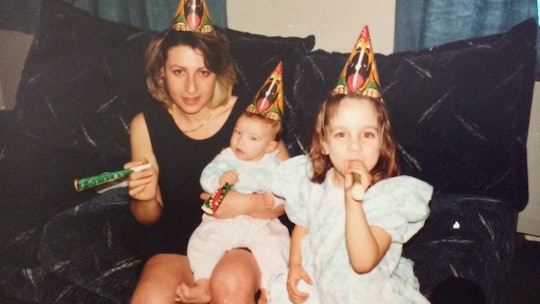 How Having Kids Helped Me Heal My Relationship With My Mom

Right now, my 3-year-old twins are spending the day at my mother’s house about 45 minutes away. Even though I’m generally leery of leaving them with others (partly because I’m paranoid, and partly because I know that it’s a lot to ask someone else to take care of two toddlers for any length of time), I know for certain they’re well taken care of. I know they’ll be fed lots of good, homemade food, that they’ll have fun, and that they’ll be with someone who cares about them just as much as I do — someone who will be endlessly patient and loving and warm. I am so glad that my children will get to be on the receiving end of this kind of unconditional love from my mother, but if I’m being honest, before they were born, I wasn’t sure if they would be. Because, if I’m being honest, she wasn’t that way with me at all.

There’s no doubt in my mind that my mother loved me the very best way that she could. She taught me to be strong and self-reliant and ambitious, and she also gave me the opportunity to make a lot of my own decisions (she even let me change my name when I was 8 years old, which, I now realize as a mother myself must have been very difficult). I’m glad that she encouraged me, that she told me I was capable and smart, and that I didn’t need anyone else’s permission to follow my own dreams. But I see her now with my own children, doling out hugs and kisses with endless understanding and deep, limitless patience, and I think, “Who is this woman?”

Sometimes I look at my daughter and think, oh man. Even though my son and daughter were born only 20 minutes apart, even though they grew together in my body at the same time, I’ve felt from the beginning that mothering a girl is much more of a challenge. Giving birth to a daughter is like holding a mirror up to your own face, being forced to see all of the things you like about yourself and all of the things you don’t. It makes you think about your life, how it felt when you grew up, all of the things you want to recreate or avoid for your sweet, perfect baby girl, and it makes you think about your own mother, for better or for worse. Was she there for me? Do I want to be like her? What do I want to give my own daughter that I did or didn’t have myself? If she turns out exactly like me, what will I want her to know and feel and understand? What if she doesn’t turn out like me at all?

My strong, loyal, hardworking single mother gave me everything I needed externally and then some — every single opportunity I could have imagined, and every ounce of confidence and self-esteem that she could possibly throw my way. I want to give that to my own daughter too (or at least a version of it), but what I really want to give her — what I’ve wanted to give her as soon as I knew she existed — was love. So much love. Gentle love, kind love, understanding love. Love that shows itself through warm hugs and forehead kisses and reassuring back rubs and shoulder squeezes, and arms that will always be open to her no matter how old she gets. I want her to know that she can always trust me to be patient, to be understanding; that I will always dig down as deeply as I can to try and see things from her point of view, no matter how frustrated or angry or sad or scared that point of view might make me. I may not be a super organized mom, or a brilliant chef whipping up organic, healthy meals every night. She’ll probably never have a Pinterest-worthy bedroom or birthday party — or anything else that shows up on that website and makes women like me feel inadequate — but empathy and nurturing? She’ll get that in spades, and so will her brother.

Before my children were born, I worried silently about what my mother’s role in their life would be. I was scared that she might teach my children the same well-intentioned lessons she’d tried to teach me — how to toughen up, how to be independent, how to grow a thick skin, how to set goals and never quit until you’ve reached them. At first glance, those things seem awesome, and I know that’s why she wanted to raise me that way. But what I’ve learned the hard way is that children need to know that it’s OK to be however they are, even if means they get scared or that they cry or that they have feelings that get hurt easily. Even if it means that they need to quit sometimes, or that they might not always be working towards some external prize or reward. But even if I could give them this — even in my best-case-scenario where I never screwed it up — how would I mitigate the effects of my mother’s unintentionally-misguided influence on my kids as they grew?

When the twins were around 18 months old, my mom came out to visit, partly to see us and partly because I was an overwhelmed wreck of a human being who just needed someone — anyone — to help me survive. I was stressed, overwhelmed, anxious, exhausted, and being a mom was kicking my butt in a major way. When my mom showed up on my doorstep, I could have cried from sheer relief, and I stepped back and let her take full control of the situation (even if it meant that I would have to listen to her criticize my messy house and the old food that had gone bad in my refrigerator).

The kids were going through a challenging stage at the time, throwing food and whining and just generally being young children becoming aware of all the things they couldn’t say or do or control in their lives. In truth, part of me was waiting for my mom to lose it, to get frustrated and impatient, just so I could say, “SEE, I TOLD YOU IT WAS HARD.” But that never happened.

Instead I saw a woman I felt like I hardly knew.

She cooed gently at my daughter when she threw her food on the ground, and when my son fell down and bumped his head, she didn’t shush him and tell him he was fine, nor did she reprimand him for running in the house when she’d told him to be careful. Instead, she hugged him. She kissed his forehead and asked him how he felt, and she let him stay in her arms until he was ready to get back up again.

I felt genuinely confused. What was happening here? This was new behavior, right? Or had she always been this way and I’d just called it wrong, unappreciative of her love and kindness. Was it just me? Did I make up an emotional trauma where there never actually was one?

I needed to say something, to bring it up. But how do you ask your mother why she is suddenly so much more loving with your children than you ever remembered her to be with you?

“Were you this way with me and Hayley?” I asked, tentatively. “You’re just so patient and cuddly and warm with the twins and I honestly don’t remember you being like that with us.”

I was waiting for my question to hit her like a slap in the face, bracing myself for the impact, almost instantly wishing I could take the words back into my mouth where I could swallow them into my stomach. But, surprisingly, she didn’t seem to mind.

“I don’t know why exactly, but I think it’s different with grandchildren,” she explained. Adding:

With you and your sister I was so stressed, so tired. I was a single mom, I was balancing everything. And I wanted to make sure you’d turn out OK. I felt like I needed to prepare you for life in case anything ever happened to me, so I didn’t think as much about hugs and kisses.

Hearing that explanation left me torn. On the one hand, seeing my mother love my children so openly meant everything. It made me see her in a new light, gave me a new, deep respect for her. I feel an incredible amount of gratitude to her now for what she gives my children that, by far, outweighs any of the negative feelings about my own experience I might be still carrying around with me.

But on the other hand, I can’t help but think, Why couldn’t you have done this with me?

Sometimes I wonder what it’d have been like if I had had the grandmother version of my mom back when I was a kid. What would it have been like, how would it have felt? Would I have been able to save myself years of therapy? Or would I just have ended up going and talking about something else? Are my children going to grow up and end up on their own therapist’s couch, talking about how their mother always hugged them, but she never did x, y and z? (Yes, most definitely, is the likely answer to that question.)

But what I know now, as an adult and as a mother, is that it doesn’t really matter. It doesn’t really matter what my mother was like when I was a kid, because right now, with my own kids, she is amazing. She is loving and kind and patient, and it is allowing my children to grow up knowing that there are people other than mom and dad who love them and who are watching out for them and who they can trust to keep them safe. As much as I would have liked to have had this version of her for myself, I’d much rather have it for my children.

And somehow, surprisingly, I got it.